A modern retelling of Little Red Riding Hood in which Federico rides his bicycle to the market for Abuelo’s groceries, then stands up to a hungry wolf. Includes a recipe for pico de gallo and glossary of Spanish terms.

The big bad wolf is hungry and on today’s menu is Grandma, with Red Riding Hood for dessert. But no one is home at Grandma’s house, only a nightdress lying on the bed. The wolf puts on the nightie and sets off to see what he can catch dressed as Grandma. 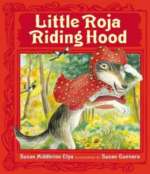 Three children, each with an extraordinary gift, must save an empire from its wicked ruler. The gift of fire, wind, and water alone are not enough to stop a cruel emperor. With the love of their parents and a special cane from a mysterious old woman, the children learn that working together as a family is stronger than hate and greed.

“This is the first time I’m taking the bus by myself. Mom packed me a snack and had me bring my sweater in case I get cold.” But Mom likely didn’t imagine the adventure her little girl would have as she rides to her grandmother’s house in this picturebook. While the bus is taking her down the streets, through a forest and into a pitch-black tunnel, the little girl encounters an assortment of animal characters who enliven her journey, including a goat who offers her a flower from a bouquet, a wolf child with whom she happily shares her cookies and a fox who attempts to pickpocket a bear.

From the Caldecott Honor illustrator of Casey at the Bat comes a rich and exquisitely crafted edition of one of the best-known tales by the Brothers Grimm. Christopher Bing captures the light and darkness, as well as the deep emotional core, of the story of an innocent girl and the wolf who would devour her in this most magnificent and definitive version of the tale.

Eleven classic tales are retold with an injection of Latino culture, providing a twist on the traditional forms while sustaining a freshness all their own. The title story, “Red Ridin’ in the Hood,” moves the setting to the barrio, where Red decides to brave dangerous Forest Street in order to reach her abuelita and encounters the menacing wolf in a thumping Chevy lowrider. Some stories are set in the Mexican countryside; in “Belleza y La Bestia,” the beautiful heroine is a defender of the Revolution and teaches the beast about the righteousness of the freedom fighters. “El Día de los Muertos,” a retelling of the myth of Orpheus and Eurydice, takes place in the time of the Aztecs and casts Orpheus as the feather-maker Nochehuatl.

These and the other cuentos in this book are further brought to life by abundant illustrations, by turns comical and poignant.

Just as fairy-tale magic can transform a loved one into a swan, the contributors to this book have transformed traditional fairy tales and legends into stories that are completely original, yet still tantalizingly familiar. In this book you will find:• a Rapunzel whose most confining prison is her loneliness • a contemporary rendering of the Green Man myth • two different versions of Red Riding Hood • a tale that grew out of a Celtic folk song • Sleeping Beauty’s experience of her enchantment• two works inspired by the Arabian Nights • and morel In the follow-up to A Wolf at the Door, thirteen renowned authors come together with a selection of new and surprising adaptations of the fairy tales we think we know so well. These fresh takes on classic tales will show you sides of each story you never dreamed of.

In this Chinese version of the classic fairy tale, a mother leaves her three children home alone while she goes to visit their grandmother. When the children are visited by a wolf, pretending to be their Po Po, or granny, they let him in the house, but ultimately are not fooled by his deep voice and hairy face. Combining ancient Chinese panel art techniques with a contemporary palette of watercolors and pastels, this story brings lessons about strangers, trust, and courage to a new generation.

Yum! Tortuga is bringing a delicious supper to his abuela of ensalada, tamales, and flan. No wonder his amigos–Iguana, Conejo, and Culebra–are following him. But they aren’t the only ones after the tortoise. Coyote has his own dinner plans for Tortuga and his grandmother. Can the three amigos warn them in time, in this variation of Little Red Riding Hood? A companions to Mañana, Iguana; Fiesta Fiasco; and Count on Culebra.