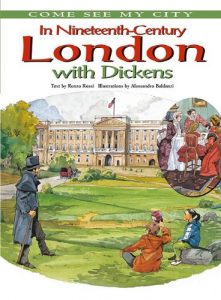 Presents young readers with a journey back in time accompanied by the author Charles Dickens as he provides a tour of nineteenth century London, discussing the everyday life of the people and visiting the famous landmarks of the city.

The tale of a bookseller’s daughter, Meg Moore is the motherless and only child of a bookseller with a thriving business in Restoration London-and that makes her an heiress. She knows that someday she will have her pick of suitors, and that with the right husband she can continue in the book trade and be friends with wits and authors, as her father is. But Mr. Moore’s unexpected marriage throws all Meg’s dreams into confusion. Meg resists the overtures and edicts of her stepmother with a cleverness equaled only by her fierceness, but in spite of it all her rival’s belly soon swells with what Meg fears will be her father’s new heir. Meg seeks wisdom from almanacs and astrologers, plays and books of jests, guides for ladies and guides for midwives. Yet it is through her own experience that she finds a new matrimony with which to face her unknown future. This vibrant novel recreates a lively and fascinating historical period when women claimed a new and more active role in London’s literary scene.

Ivy is used to being overlooked. The youngest in a family of thieves, scoundrels, and roustabouts, the girl with the flame-colored hair and odd-colored eyes is declared useless by her father from the day she is born. But that’s only if you look at her but don’t see. For Ivy has a quality that makes people take notice. It’s more than beauty — and it draws people toward her.

Which makes her the perfect subject for an aspiring painter named Oscar Aretino Frosdick, a member of the pre-Raphaelite school of artists. Oscar is determined to make his mark on the art world, with Ivy as his model and muse. But behind Ivy’s angelic looks lurk dark secrets and a troubled past — a past that has given her an unfortunate taste for laudanum. And when treachery and jealousy surface in the Eden that is the artist’s garden, Ivy must learn to be more than a pretty face if she is to survive.

Julie Hearn, author of The Minister’s Daughter and The Sign of the Raven, has created a memorable tale of nineteenth-century England with a character destined to take her place alongside Dickens’s Pip and Oliver Twist.

A fictional account of the experiences of Jim Jarvis, a young orphan who escapes the workhouse in 1860’s London and survives brutal treatment and desparate circumstances until he is taken in by Dr. Barnardo, founder of a school for the city’s “ragged” children.

A city has many lives and layers. London has more than most. Not all the layers are underground, and not all the lives belong to the living. A twelve-year-old boy named George Chapman is about to find this out the hard way. On a school trip he’s punished for something he didn’t do. In a tiny act of rebellion, he lashes out at a small carving on the wall—unexpectedly breaking it off. And then something horrible does happen: a stone Pterodactyl unpeels from the wall and starts chasing him. George is already running before his mind starts trying to tell him this is impossible.

Sherlock Holmes, just thirteen, is a misfit. His highborn mother is the daughter of an aristocratic family, his father a poor Jew. Their marriage flouts tradition and makes them social pariahs in the London of the 1860s; and their son, Sherlock, bears the burden of their rebellion. Friendless, bullied at school, he belongs nowhere and has only his wits to help him make his way.But what wits they are! His keen powers of observation are already apparent, though he is still a boy. He loves to amuse himself by constructing histories from the smallest detail for everyone he meets. Partly for fun, he focuses his attention on a sensational murder to see if he can solve it. But his game turns deadly serious when he finds himself the accused — and in London, they hang boys of thirteen. Shane Peacock has created a boy who bears all the seeds of the character who has mesmerized millions: the relentless eye, the sense of justice, and the complex ego. The boy Sherlock Holmes is a fascinating character who is sure to become a fast favorite with young readers everywhere.

Twelve-year-old biracial James has grown up in a musical family. Not only are both of his parents musicians, but his four grandparents are as well. Everyone assumes that James will pursue music, yet he would rather become a newspaper reporter…or an astronomer…or a cook…anything that will let him leave music behind and be his own self. Everything changes when, on a family visit to London, James discovers a portal that leads to London in the year 1600, then finds himself unable to return to the point in time he had left behind. James is forced to join the Children of the Chapel Royal, a group that performs for the queen of England, and the musical talents he denied are now put to the test and pushed to their limits. In this alternate world James comes to realize that he cannot survive and get back to the twenty-first century without recognizing, understanding, and making the most of his musical gifts. Jane Louise Curry brings Elizabethan London to life in this remarkable story about music, family, and finding one’s place in the world.

James Bond is no ordinary boy. In a north London cemetery, a professor is kidnapped at gunpoint. Then, a suspicious letter crammed with cryptic clues arrives at Eton. To decipher the deadly mystery, James Bond must take a series of dangerous gambles. Once the code is cracked he has just forty-eight hours to save the professor from the dark forces that threaten to destroy them both. And if they can’t escape, it’s not only their future under threat.

Ted and Kat watched their cousin Salim board the London Eye. But after half an hour it landed and everyone trooped off–except Salim. Where could he have gone? How on earth could he have disappeared into thin air? Ted and his older sister, Kat, become sleuthing partners, since the police are having no luck. Despite their prickly relationship, they overcome their differences to follow a trail of clues across London in a desperate bid to find their cousin. And ultimately it comes down to Ted, whose brain works in its own very unique way, to find the key to the mystery. This is an unput-downable spine-tingling thriller–a race against time.

Panic fills the streets of London on a night in 1756 when the earth suddenly lurches forward and starts spinning out of control. Within moments, eleven days and nights flash through the sky, finally leaving the city in total darkness. Is the end of the world at hand? Agetta Lamian fears so. She’s the young housemaid of Dr. Sabian Blake, a scientist who has recently acquired the Nemorensis, the legendary book said to unlock the secrets of the universe. And what he sees through his telescope confirms what he has read: This disaster is only a sign of things to come. Agetta overhears Dr. Blake’s prophecy that a star called Wormwood is headed toward London, where it will fall from the sky and strike a fatal blow. Dr. Blake believes the comet will either end the world as he knows it or hearken a new age of scientific and spiritual enlightenment. Soon even Agetta seems to have been seduced by the book, and whom she ultimately delivers it to will determine much more than just her fate.