Jack the wolf doesn’t mind living alone, but he does get lonely on long winter nights. Then one day Walter the dormouse comes for a visit. Walter is fun to be around, but he certainly does have some annoying habits! Can Jack get over them, or will this be the end of their friendship?

Two lonely grade-eight kids in rural Australia develop a friendship as they work together to unlock a mystery. Laura feels like an outcast because of her family’s artist lifestyle, her curly hair and bushy eyebrows, and the decaying mansion she calls home. Leon, newer to the area, is ostracized for living with his grandmother, the rumors about his father being in prison, and his shabby appearance. The friendship between the two progresses slowly because Laura, desperate to fit in, is embarrassed to be seen with Leon. As they work together to uncover the history of Laura’s house and Mr. Visconti-its original owner-and his tragic love story, Laura learns to understand the value of friendship.

A sweet, read-aloud story of friendship for dog lovers everywhere in a tale about the relationship between a lonely person and a homeless pet that offers laughs and sincere emotion. Tilly Trumble collects chairs, but she’s still looking for the perfect four-legged, scruffy old thing to fill the space by the fire. When a scruffy dog arrives and doesn’t want to leave, Tilly finds the perfect companion for her chair collecting, sausage eating, and star gazing. Dog owners especially will find warm satisfaction in this story of a pooch who teaches his human friend a lesson in love, loyalty, and furniture arranging.

Little Parisa-Farsi, left alone after an earthquake demolishes her home of Bam, Iran. She doesn’t despair. She does what any little girl would do. She dances. She laughs. She shares. She reveals our common humanity.

Big Wolf has always lived alone at the top of a hill under a tree, so when a little wolf suddenly arrives one day, he does not know what to think. Everytime, he turns around, there is little wolf, until one day he is missing and Big Wolf gets worried.

Gary the gorilla is the only animal in the jungle who is lonely — all the other animals seem to have companions — and even the people of the village are frightened of him so they stay well away. But Gary has nightmares that hunters catch him, and he wishes that everyone could see how lonely and afraid he is. Then one day a tiny sunbird hamed Ray thinks he looks so sad that he ventures to talk to him. Soon this unlikely pair are best of friends, but Ray has a family and Gary can’t help wishing for one too. Then one day Ray doesn’t show up as usual, only to return days later with a wonderful surprise for Gary. In this delightful story of friendship, Ray’s resourcefulness in support of his fearsome friend has a touching and satisfying ending.

Soledad’s friends help her discover the many things that she can do to entertain herself when she is alone in her apartment.

This book is compelling, intriguing, revelatory- Jenny Valentine’s new novel will reach out and grab you by the heart. 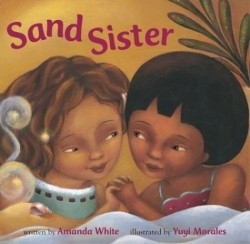 When lonely Paloma goes to the beach and wishes that she had a sister to play with, the girl she draws in the sand comes magically alive, and at day’s end her parents give her the good news of a new baby on the way.