Britain, 480 AD. Saxon barbarians are invading, pushing the civilized British out of their own island. Morgan is the daughter of the governor of Cornwall. But when her father is murdered and her mother taken as the Uther Pendragon’s new wife, she has to flee to Ireland to avoid being murdered herself. But Ireland is no refuge. She’s captured in a slave raid and sold to a village witch. As Morgan comes of age, she discovers her own magical powers. She falls in love with a young Irish chieftain, and makes him powerful. But will her drive for revenge destroy her one chance for love and happiness?

A teenage girl recounts the suffering and persecution of her family under the Nazis–in a Polish ghetto, through deportation, and in concentration camps.

When guerrilla soldiers strike Santiago’s village, they shoot at everyone in their path. Dos Vías is on fire, and the night glows red. “Take the cayuco and sail to the United States of America. Now go!” Santiago’s uncle Ramos tells him, and Santiago, twelve, and his four-year-old sister, Angelina, flee.

With a map, a machete, and very little food, Santiago and Angelina set sail in their uncle Ramos’s sea kayak, built for just such an escape, but not for a sailor who is only a boy. Santiago heads for the United States on a voyage that will take them through narrow channels guarded by soldiers, shark, infested waters, and days of painful heat and raging storms. Santiago knows that he and Angelina probably will die trying to make the voyage, but they certainly will die at the hands of rebels or government soldiers if they do not try.

After struggling with the death of her mother and father, Ursula worries about her beloved Aunt Dana who boarded a ship during very rough seas weeks ago and has not returned home, and finds herself faithfully waiting with fear and hope.

This is the story of Ahmek, a young beaver, going about the business of living in his natural habitat. Through his eyes, we see a man, an artist painting the wilderness. Slowly, cautiously, Ahmek and the man establish a rapport, only to have it shattered when poachers destroy the beaver dam and threaten Ahmek’s life. In a desperate escape, Ahmek sets out alone on his life’s great adventure. He meets a charming cast of characters, his life true love, and he does find happiness. But there is always that feeling that one day he should return. When he does, he becomes part of a significant mystery that to this day has never been solved. 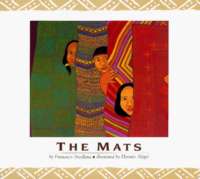 Marcelina’s father comes home from a trip to Manila with beautiful hand-made sleeping mats for each member of his large family, including the three daughters who died when they were very young.

The Mats first appeared as a short story in Philippine Magazine in 1938.

Ten-year-old Bamse and his Jewish friend Anton participate in the Danish Resistance during World War II.