How much work can one little chicken be? When Leora finds a chicken in her front yard, she imagines keeping it as a pet and gathering eggs for breakfast every morning. But her mother has a very different view. Following a Jewish law that says “finders aren’t keepers,” Mrs. Bendosa is determined that the family should care for the chicken just until its rightful owner returns. Soon, however, one little chicken becomes a flock of chickens, a flock of chickens becomes two goats, two goats become a herd of goats…until—Oh! What a house! Elisa Kleven’s detailed folk art brings Elka Weber’s humorous retelling of a traditional tale to life and promises to leave readers pondering the adage, “finders, keepers.”

When a class leaves for recess, their just-baked Gingerbread Man is left behind. But he’s a smart cookie and heads out to find them. He’ll run, slide, skip, and (after a mishap with a soccer ball) limp as fast as he can because: “I can catch them! I’m their Gingerbread Man!” With help from the gym teacher, the nurse, the art teacher and even the principal, the Gingerbread Man does find his class, and he’s assured they’ll never leave him behind again. 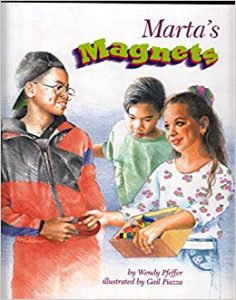 Marta’s sister Rosa calls her magnet collection junk, but Marta’s magnets help her make friends in her new home and help her retrieve a lost key for Rosa’s new friend. 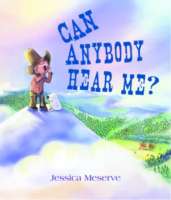 Jack is quiet—which wouldn’t be so bad if the rest of his family wasn’t SO NOISY. No one can hear him over the sound of their own voices. So when Jack tells them he’s going up the mountain one day, nobody hears him. And when night falls, nobody knows where he is. Now Jack will have to find his voice in order to help his family find him. This satisfying story is set against a rural western backdrop and features Jessica Meserve’s vivid illustrations, which burst with color and personality. 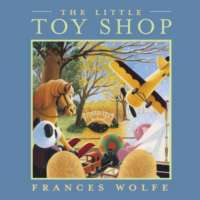 Come and explore Mr. Kringle’s special little toy shop, where he spends his days helping every customer find just the right toy. When a box arrives at the shop with a small stuffed bunny inside, Mr. Kringle determines to find him a loving home in time for Christmas. Could the little girl who peers through the toy-shop window be the one who provides just the home he seeks?Meet Teddy, the stuffed bear who befriends Bunny, and watch their friendship deepen as, one by one, the other toys leave the shop. Will the little girl who stared at Bunny through the window ever come back to claim him?Frances Wolfe’s vibrant paintings complement her poignant prose in this heartwarming tale of love lost and found for the young and the young at heart.

A broken man, unable even to work, Noor Nobi wanders the busy streets of Calcutta. One day he found the cages crammed with birds. With his last bit of money he buys the sick, left over birds that no one wants. At home, he nurses them back to health, and in a simple act of kindness that few understand, sets them free. So begins Noor Nobi’s journey back from despair. The Birdman is a true story.