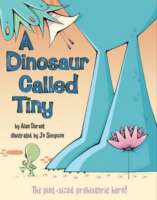 When Tiny the Dinosaur hatches out of a great, big egg, no one can believe how small he is! Tiny grows—a little—and tries to make friends with the other young dinosaurs, but they laugh and say that he isn’t big enough to play their games. But when one of the other dinosaurs is suddenly in trouble, Tiny’s small size—and big heart—help him save the day.

Why does everyone seem so scared? That’s what the new boy in town, Rex Norton-Norton, aka Rex Zero, wonders as he rides his bike through Ottawa’s streets. Is it spies? Kidnappers? Or is it because of the shadowy creature some say is stalking Adams Park? One thing is certain in this summer of 1962 as the Cold War heats up: nothing is quite what it seems. What’s a boy to do? If his name is Rex Zero and he has a bike he calls “Diablo,” five wild and funny siblings, an alpha dog named Kincho, a basement bomb shelter built of old Punch magazines, and a mind that turns everything inside out, he’s bound to come up with an amazing idea. 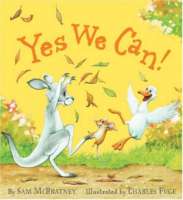