In seventeenth-century China, orphaned ShaoShu, who can squeeze into small spaces, puts his life in danger when he becomes a spy for a young band of warrior monks known as the Five Ancestors and bravely infiltrates evil Tonglong’s camp.

Jack Fletcher is shipwrecked off the coast of Japan, his beloved father and the crew lie slaughtered by ninja pirates. Rescued by a legendary master swordsman and brought under his wing, Jack begins the grueling physical and psychological training needed to become a samurai. Life at Samurai school is fraught with difficulty for Jack who is bullied and treated as an outcast. With his friend the remarkable, beautiful Akiko at his side and all the courage he can muster, Jack has to prove himself. Will he be able to face deadly rivals and challenges that will test him to his very limits? 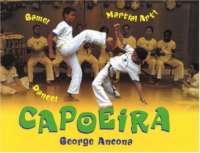 CAPOEIRA—it\’s a game, a dance, a martial art! It\’s a way of expressing oneself through movement and music. With action-packed photographs and accessible text, readers are introduced to this exciting, popular game. At Madinga Academy in Oakland, California, a group of girls and boys practice the acrobatic moves of capoeira. Then they begin to play games to the infectious, rhythmic beat of traditional music and singing. On to Brazil to experience capoeira in its historic birthplace, where it dates back four hundred years. Capoeira developed as a way of fighting among enslaved Africans, was outlawed the the government, and was permitted once again in 1930 as a martial art and game. Back in Oakland, at an end-of-year ceremony, students receive their colored ropes indicating their levels of accomplishment. They also look forward to next year, and the fun of expressing themselves through the game, dance and martial art of capoeira. 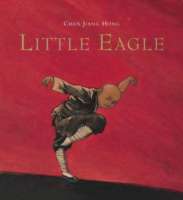 Little Eagle tells the story of a young boy who is orphaned and taken in by a kind old man. The story centers on the boy’s discovery of his guardian’s gift as a master of Eagle boxing, a specialized form of Kung Fu. Combining classical Chinese elegance with elements of Japanese anime, Chen’s bold and energetic illustrations bring the dramatic physicality of Eagle boxing to life. Children will root for Little Eagle as he learns his new discipline and faces many challenges on his way to becoming a Kung Fu master himself. A perfect choice for children taking a martial arts class or simply looking for a good story.