Columcille was born in a remote corner of Ireland in the year 521. Legend has it that as a child, he was fed a cake filled with the letters of the alphabet, and so learned to love writing. He grew up to become a monk and a scribe a thousand years before the invention of printing, when books had to be copied by hand. There was one book, a beautiful volume of psalms from distant Rome, that Columcille especially loved, and even though its owner refused him permission, Columcille secretly copied it. The copy was discovered, and a dispute arose over who it belonged to: Columcille, who made it, or the owner of the original. So better was the argument that a battle was fought between the two men’s powerful friends; although Columcille’s side won, the victory felt hollow to him. To punish himself, he set out in a tiny boat, vowing to leave Ireland forever.

Martin is one of a handful of Templar Knights to escape when the king of France and the pope conspire to destroy the noble order. The king aims to frame the Templars for heresy, execute all of them, and make off with their legendary treasure. That’s the plan, anyway, but Martin and several other surviving knights mount a counter-campaign to regain the lost treasure of the Knights Templar.

Serafina was living the normal life of a village girl, when she gets a mysterious letter—her first letter ever, in fact—from a great aunt, she’s never heard of. Her great aunt is actually a Baba Yaga, a magical witch who lives in an even more magical cottage. Serafina’s life takes an amazing turn as she finds herself becoming the new Baba Yaga. But leaving behind home and the boy she loves isn’t easy, and as Serafina grows into her new and magical role answering the first question any stranger might ask her with the truth, she also learns about the person she’s meant to be, and that telling the future doesn’t always mean knowing the right answers.

As English armies invade Scotland in 1306, eleven-year-old Princess Marjorie, daughter of the newly crowned Scottish king, Robert the Bruce, is captured by England’s King Edward Longshanks and held in a cage on public display.

The story of the young Merlin’s coming-of-age continues in this thrilling sequel to Passager. “An enjoyable introduction to Arthurian fantasy.”–The Horn Book 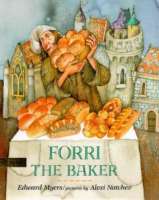 When the Chlars invade the peaceful village of Ettai, it is Forri the baker who comes up with an ingenious plan to save his fellow townspeople.

An angel is buried behind the abbey! It’s 1347, and Will, an orphan boy, lives and works as an apprentice of the Crowfield monks. Sent into the forest to gather firewood, he stumbles across a trapped, wounded creature no bigger than a cat.The little goblin shares a terrible secret: Buried deep in the snow behind the monastery is an angel. But, Will wonders, how can an angel die? And what does this angel have to do with the history of Crowfield? When two cloaked strangers show up and start asking questions, Will is drawn into a dangerous world of Old Magic.

A lively, educational look at medieval life explores the role of the fool during the Middle Ages, explaining how both men and women could be fools and showing the fool’s relationship to modern comedy.