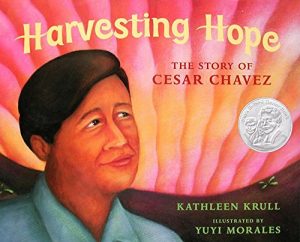 Cesar Chavez is known as one of America’s greatest civil rights leaders. When he led a 340-mile peaceful protest march through California, he ignited a cause and improved the lives of thousands of migrant farmworkers. But Cesar wasn’t always a leader. As a boy, he was shy and teased at school. His family slaved in the fields for barely enough money to survive.

Cesar knew things had to change, and he thought that–maybe–he could help change them. So he took charge. He spoke up. And an entire country listened.

An author’s note provides historical context for the story of Cesar Chavez’s life.

Juanito Paloma, his mother Lucha, and his elderly father Felipe, are a tiny family who, after years of working in the fields of California’s Central Valley, move to San Francisco’s Latin Mission District to live with relatives. Juanito longs to be in one place, rather than “going, going, going,” and pines for the love of his often-absent father. This family story of growing up Latino will resonate with readers of all backgrounds.

In this novel in verse, unprecedented in Chicano literature, renowned poet Juan Felipe Herrera illuminates the soul of a generation. Drawn from his own life as well as a lifetime of dedication to young people, CrashBoomLove helps readers understand what it is to be a teen, a migrant worker, and a boy wanting to be a boy. Sixteen-year-old Cesar Garcia is careening. His father, Papi Cesar, has left the migrant circuit in California for his other wife and children in Denver. Sweet Mama Lucy tries to provide for her son with dichos and tales of her own misspent youth. But at Rambling West High School in Fowlerville, the sides are drawn: Hmongs vs. Chicanos vs. everybody vs. Cesar, the new kid on the block. Precise and profound, CrashBoomLove will appeal to and resonate with high school readers across the country.

After his family hires migrant Mexican workers to help save their Vermont farm from foreclosure, eleven-year-old Tyler befriends the oldest daughter, but when he discovers they may not be in the country legally, he realizes that real friendship knows no borders.

Brothers Gabriel and Gustavo, high school students in the Rio Grande Valley of Texas, are horrified when their father suggests that they spend the summer in California doing field work to earn extra money. They’re not immigrants; the boys and their younger sister Paula were born in Texas, and the idea of picking fruits and vegetables hard labor usually associated with undocumented workers is totally humiliating. But their father thinks working in the fields will be good for his children. After all, the experience didn’t hurt him when he was a kid. ”Look at me. I didn’t die. All that work made me stronger.” Gustavo, heading into his senior year, doesn’t want to leave his girlfriend. And what will all his friends think? Gabriel doesn’t care what anyone thinks; he’s just not interested in spending the summer doing back-breaking labor. It’s only when the promise of visiting Disneyland, after working the fields, is offered that they ultimately agree to the ”vacation.” Before long, the family finds itself in a migrant camp, living in a shack with no electricity or bathroom. Toiling in the fields by day, trying to get the hang of picking strawberries, the boys and their father attempt to make sense of it all, including the motives and hopes of their fellow workers: the manic Borrado brothers, who are the fastest pickers around, and Victor, who introduces them to the canal where the migrant teens swim, even though two boys drowned there last season. Unfortunately, while learning their way around town, the family members experience the racism frequently directed at recent immigrants. How often, Gabriel wonders, has he done the same thing and dismissed someone just for being in the U.S. illegally? In this illuminating novel for teens that sheds light on the subjects of immigrant labor and prejudice within the Hispanic community, Genaro Gonzalez blends the ageless theme of fathers and sons at odds with a contemporary issue weighing on many minds. While set in a place unfamiliar to many, the characters’ hopes and dreams for the future will resonate with young adult readers.

At the age of fourteen, Francisco Jiménez, together with his older brother Roberto and his mother, are caught by la migra. Forced to leave their home, the entire family travels all night for twenty hours by bus, arriving at the U.S. and Mexican border in Nogales, Arizona. In the months and years that follow, Francisco, his mother and father, and his seven brothers and sister not only struggle to keep their family together, but also face crushing poverty, long hours of labor, and blatant prejudice. How they sustain their hope, their goodheartedness, and tenacity is revealed in this moving sequel to The Circuit. Without bitterness or sentimentality, Francisco Jiménez finishes telling the story of his youth.