Their little boy wants to make miracles: He would cure the sick, feed the hungry, jail the bad guys, and fill the world up with people who care and share. The story ends with a twist, bringing a very ambitious group of wishes back down to earth. 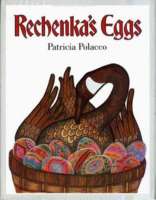 An injured goose rescued by Babushka, having broken the painted eggs intended for the Easter Festival in Moscva, lays thirteen marvelously colored eggs to replace them, then leaves behind one final miracle in egg form before returning to her own kind.

Joel will soon be 12, and he thinks nothing is going on in the small community where he lives. But he’s wrong. One day, an incident that could easily have been a catastrophe turns into a miracle. Now Joel believes he owes the world a good deed, to prove that he deserved what might have been divine intervention. He thinks up an elaborate scheme, but it doesn’t go as anticipated. Even though his heart is in the right place, feelings are hurt. If he confesses what he’s done and why, will things be put right again?

Readers who met Joel Gustafson, his father, and their friends in A Bridge to the Stars will follow, with appreciation, Henning Mankell’s shrewd depiction, in this companion novel, of the surprising changes in Joel’s existence. Mankell deftly explores Joel’s self-discovery, his realization that lives can be altered in a single moment, and his new understanding that a choice between telling the truth and keeping silent can make all the difference.

After perishing in a boating accident, two 16-year-old girls, both named Marie, ask God to allow them to return to earth where they intervene in the lives of villagers.