In 1870s London, a ten-year-old orphan girl, Birdie AcAdam, becomes the apprentice to Alfred, who traps monsters for a living.Birdie lures the bogles out of their lairs with her sweet songs, and Alfred kills them before they kill her. On the mean streets of Victorian England, hunting bogles is actually less dangerous work than mudlarking for scraps along the vile river Thames (see glossary!).

Anubis, the ancient Egyptian jackal-headed god of embalming, invites young readers to climb aboard his magic boat for a trip to the Land of the Dead. When the sun goes down, readers join Anubis as he and Ra, the sun god, fight the forces of chaos and destruction unleashed by the Evil One, a giant snake named Apophis. It’s a battle waged each night until sunrise when the forces of good prevail. During the journey, readers will meet gods, monsters, and pharaohs, learn the techniques of mummification, and help Ra conquer darkness and bring light to the world at dawn.

Morton, James, Melissa, and their father have just moved into an old house in a new town, and when Morton finds a creepy gargoyle buried in the yard, he and his siblings each make a wish–and find out that they have unleashed chaos.

Retells, in graphic novel format, Mary Shelley’s classic tale of a monster, assembled by a scientist from parts of dead bodies, who develops a mind of his own as he learns to loathe himself and hate his creator.

A fearless little boy ignores Grandma’s warning about nighttime monsters until he runs away and meets the two-headed giant’s three-headed brother. 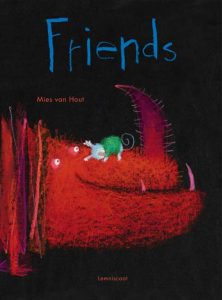 Happy was an international hit that showed off Mies van Hout’s uncanny ability to convey feelings with her vibrant illustrations.

With Friends she goes one step further and shows emotional interactions. Just as she made the fish of Happy uniquely hers, here she uses monsters to show different situations–they cuddle, laugh, play, but they also fight, tease and more–making the images recognizable for little monsters of all ages.

Suri dreams of being one such hero. But this tagalong orphan of a merchant caravan has no luck–until the day a horseless caravan pulls up. Its driver is a man with a metal heart … and a monster for sale.

The spectacular new middle-grade fantasy series from bestselling authors Garth Nix and Sean Williams. Are you a troubletwister? Jaide and Jack Shield have a secret. When they’re unexpectedly sent to live with their mysterious Grandma X, they’re thrust into a world where cats talk and strange weather comes out of nowhere. There they learn that they’re troubletwisters, with powers they must use to stop the Evil from taking over our world. Before, they’d defeated the Evil through luck and intuition. Now though, Jaide and Jack will have to learn how to use their powers, and how to keep on their toes when evil forces return.

Beaten down by a ubiquitous chorus of denials (see title), a monster suffers an existential crisis.

Surrounded by emphatic claims that it doesn’t even exist, a monster sets out not only to prove the contrary, but to establish its scariness credentials too. Alas, neither blasting the world with graffiti and printed fliers nor rearing up menacingly over a baby in a carriage, children at the barre in a ballet class and other supposedly susceptible victims elicits any response. Juggling some cows attracts attention but not the terrified kind. But the monster’s final despairing surrender—“That’s it! It’s over! I give up! … /  Monsters aren’t real (sniff)”—triggers an indignant denial of a different sort from a second, smaller but wilder-looking, creature. It takes the first in hand and leads it off, declaring “We’re two big, strong, scary monsters, and we’ll prove it.” In truth, it won’t escape even very young readers that neither is particularly scary-looking. Indeed, the protagonist-monster is depicted in the sparsely detailed cartoon illustrations as a furry, almost cuddly, bearlike hulk with light-blue spots, antlers and comically googly eyes, certain to provoke more giggles than screams.

Pip the rabbit may be little.  But the list of things he’s afraid of is very, very large.  Life the gobbler…or the wood troll…or the leggy wiggler!  Until one day, Pip gets lost in the woods and is forced to face his fears.  What is the Scariest Thing of All?  And can little Pip stand up to it?

From the beloved author and illustrator of No Matter What comes a reassuring and gentle tale of finding bravery in the most unexpected place–inside yourself.