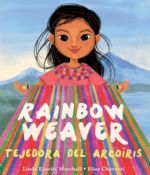 Ixchel, a young Mayan girl who is not allowed to use her mother’s thread to weave, exercises her ingenuity and repurposes plastic bags to create colorful weavings. Includes glossary and author’s note.

When her imagined perfect life with her estranged mother begins to unravel, fourteen-year-old Apple finds comfort in reading and writing poetry. 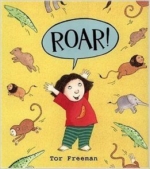 As she spends the day with her mother reading, playing, doing chores, and eating, a young girl imagines that she is various animals.

On Amanda’s thirteenth birthday, her father is killed by a drunk driver while on the way to pick up her birthday present. She’s stunned when she overhears her mother blaming her: “If she hadn’t insisted on that stupid watch for her birthday, he would still be alive.” Her mom retreats into extra shifts at work, leaving Mandy with her grandmother and making her feel as if she has lost both parents. To make matters worse, she’s the butt of cruel pranks at school. One day, some girls even glue her skirt to the chair! But things take a turn for the better when she befriends Paloma, an unusual new student at Central Middle School, who introduces her to yoga and meditation. And she reluctantly becomes friends with Rogelio, a fat boy who is bullied even more than she is by their classmates.

Orphaned at the age of four when her village in Viet Nam is bombed, Kim is rescued by American soldiers and raised in an orphanage, always finding comfort in her mother’s last words: “Don’t be afraid. I will always be with you.”

Written in Arabic. 14 secrets are shared by a mother and her daughter with each secret told in a short story. Each secret is told twice, switching between the mother’s and daughter’s voices in a feminine revelation. They both share their thoughts about some daily life event that every mother and daughter goes through. The secrets they share are from the heart of the Saudi society.

After down-to-earth Zeeta and her flighty mother, Layla, settle in the idyllic beachside town of Mazunte, Mexico, where Zeeta’s true love, Wendell, has an internship photographing rare sea turtles, Zeeta discovers that paradise has its dark side as she and Wendell dig deeper to unearth her elusive father’s past.

Khosi lives with her beloved grandmother Gogo, her little sister Zi, and her weekend mother in a matchbox house on the outskirts of Pietermaritzburg, South Africa. In that shantytown, it seems like somebody is dying all the time. Billboards everywhere warn of the disease of the day. Her Gogo goes to a traditional healer when there is trouble, but her mother, who works in another city and is wasting away before their eyes, refuses even to go to the doctor. She is afraid and Khosi doesn’t know what it is that makes the blood come up from her choking lungs. Witchcraft? A curse? AIDS? Can Khosi take her to the doctor? Gogo asks. No, says Mama, Khosi must stay in school. Only education will save Khosi and Zi from the poverty and ignorance of the old Zulu ways.School, though, is not bad. There is a boy her own age there, Little Man Ncobo, and she loves the color of his skin, so much darker than her own, and his blue-black lips, but he mocks her when a witch’s curse, her mother’s wasting sorrow, and a neighbor’s accusations send her and Gogo scrambling off to the sangoma’s hut in search of a healing potion.J.L. Powers holds an MA in African history from State University of New York-Albany and Stanford University. She won a Fulbright-Hays grant to study Zulu in South Africa, and served as a visiting scholar in Stanford’s African Studies Department. This is her second novel for young adults.

A girl and her mother spend a day together gardening, making cookies, and visiting a neighbor. Includes Spanish words interspersed in the text.

A young girl describes activities that her great-grandmother, grandmother, and mother all did for their daughters, and that she does for her doll.