Tenzing Norgay grew up in Nepal, herding yaks in the shadow of Chomolungma, the mountain also known as Everest. He has always dreamed of climbing to the top. He becomes a guide, leading treks through the Himalayas, and finally attempts the highest mountain himself, but doesn’t make it.
Across the ocean, in New Zealand, Edmund Hillary grew up tending his father’s bees. He climbed his first mountain at sixteen and has climbed all over the world ever since. He tries Everest, with no success.
In 1953, the two men set out on the same expedition to climb Everest. Their party numbers four hundred, counting all the guides and porters. But the climb is grueling, and eventually Norgay and Hillary are the only two determined to continue. They tramp over windswept glaciers, crawl across rope bridges, hack footholds in the ice … until finally they reach the top of the world!

Two married gods disobey their orders and visit Earth, are turned into mortals as punishment, and eventually become mountains so that they will always stand side by side. 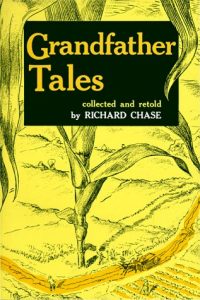 A collection of folk tales from North Carolina and Virginia for a slightly older audience than that for Chase’s Jack Tales. “The collector of the Jack Tales has brought new joy to children and storytellers in these twenty-four tales and a mummer’s play . . . richly humorous. Colorful mountain speech comes to life.” — School Library Journal, starred review

What was it like to grow up Jewish in Italy during World War II? Sit with a little girl as her grandmother tells the story of her childhood in Rome, of being separated from her father, and of going into hiding in the mountains. Based on the experiences of the author’s own family, this deeply moving book set during the Holocaust deals with a difficult subject in a way that is accessible and appropriate for young readers. I Will Come Back for You is an incredible story of bravery and kindness in the face of danger.

A humorous retelling of an Appalachian folktale about a preacher who chokes on a chicken bone.

Chaska wishes that she could learn to read and write, but the schoolhouse in her little village in the Andes Mountains is too small, and only the boys and older girls can attend. So she spends her days with Grandfather, who tells her stories about the proud Incas and their gold. Many years ago, the Incas lived in the same valley as Chaska’s village and made golden objects in honor of the Sun God, Papa Inti. A few still lie buried among the rocks and stones. One day, as Chaska is thinking about these stories, she finds a golden doll–real Inca idol.

Miguel was not lonely so much as he was curious. And, when he asked his father to tell him about the city beyond the mountains, he didn’t know what would happen. Now by the shore of the Emerald Lake he must choose between his world and another. High in the Andes, surrounded by giants, Miguel learns that even a boy can stand tall enough to reach the stars. Veronika Martenova Charles crafts a mystic tale, mixing dreams with reality, humility with grandeur, folk lore with history, and presents it with the clarity of a crisp mountain breeze.