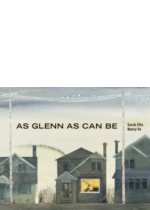 Glenn was a child who knew his own mind ― he liked boats but did not like fishing; he enjoyed puns and pranks but did not like bullying; he loved learning but did not like school … but more than anything else he loved to play the piano. Glenn had a professional performing career by the time he was fifteen; he gave concerts all over the world in his twenties. He became best known for his interpretation of Bach’s Goldberg Variations. But Glenn grew to dislike concerts ― the hall was too cold, or he didn’t feel well, or the audience made too much noise (he didn’t even like their applause!). He discovered that when he played and recorded music in an empty concert hall, he could make it sound exactly the way he wanted. He could do what he loved best, while being completely himself. 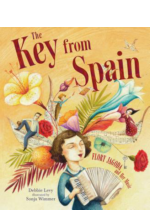 Just as her ancestors were forced to leave Spain during the Inquisition, Flory flees Europe for a new life in the United States, bringing with her a precious harmoniku and a passion for Ladino music.

A beautiful and extraordinary account of international concert pianist Zhu Xiao-Mei’s hardships and triumphs while growing up during China’s Cultural Revolution, Stirring and inspiring, this picture book relates the story of a gifted young girl’s passion for the piano in a time of historic turmoil. During China’s Cultural Revolution a young girl is taken from her family and sent to a far-off labor camp. Forbidden to play the piano, she nevertheless finds a way of smuggling handwritten music into the camp and sneaking away at night to practice a piano in a secret location—until, one night, she is caught. Inspired by the amazing true story of international concert pianist Zhu Xiao-Mei, this acclaimed picture book poetically relates an astonishing story of perseverance set against a cataclysmic period of history.

Carlos Santana grew up surrounded by music. His father, a beloved mariachi performer, teaches his son how to play the violin when he is only six years old. But when Carlos discovers American blues, he is captivated by the raw honesty of the music. Unable to think of anything else, he loses all interest in the violin. When Carlos finally receives his first guitar, his whole life begins to change.

It is Florence, 1698, and Angelo Montegne has discovered the cost of having a beautiful voice. Soon, the young castrato is at the center of court intrigue as he struggles with his new reality and those who wish to use him and his soaring soprano singing for their own purposes. As he comes to terms with his altered future, Angelo must choose between a life of fame as the protege of the Prince de Medici or a very different, far humbler destiny with the lovely daughter of the court composer. 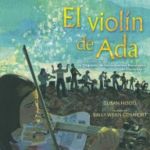 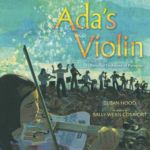 Ada Ríos grew up in Cateura, a small town in Paraguay built on a landfill. She dreamed of playing the violin, but with little money for anything but the bare essentials, it was never an option…until a music teacher named Favio Chávez arrived. He wanted to give the children of Cateura something special, so he made them instruments out of materials found in the trash. It was a crazy idea, but one that would leave Ada—and her town—forever changed. Now, the Recycled Orchestra plays venues around the world, spreading their message of hope and innovation.

Ada’s Violin is a WOW Recommends: Book of the Month for April 2017.

Follows a girl in the 1920s as she strives to become a drummer, despite being continually reminded that only boys play the drums, and that there has never been a female drummer in Cuba. Includes note about Millo Castro Zaldarriaga, who inspired the story, and Anacaona, the all-girl dance band she formed with her sisters.