Regina Petit’s family has always been Umpqua, and living on the Grand Ronde reservation is all 10-year-old Regina has ever known. Her biggest worry is that Sasquatch may actually exist out in the forest. But when the federal government signs a bill into law that says Regina’s tribe no longer exists, Regina becomes “Indian no more” overnight–even though she was given a number by the Bureau of Indian Affairs that counted her as Indian, even though she lives with her tribe and practices tribal customs, and even though her ancestors were Indian for countless generations. With no good jobs available in Oregon, Regina’s father signs the family up for the Indian Relocation program and moves them to Los Angeles. Regina finds a whole new world in her neighborhood on 58th Place. She’s never met kids of other races, and they’ve never met a real Indian. For the first time in her life, Regina comes face to face with the viciousness of racism, personally and toward her new friends. Meanwhile, her father believes that if he works hard, their family will be treated just like white Americans. But it’s not that easy. It’s 1957 during the Civil Rights Era. The family struggles without their tribal community and land. At least Regina has her grandmother, Chich, and her stories. At least they are all together.

Chronicles the childhood of EdNah New Rider Weber as she is moved from her Pawnee home to live with her father on a Navajo reservation and then is again uprooted and placed in the Phoenix Indian School. 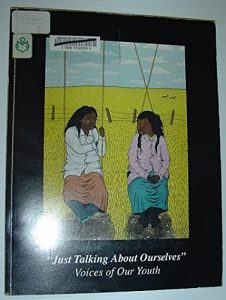