The fate of feudal Japan hangs in the balance in this bloody conclusion to the epic trilogy.Taro is at a crossroads: He has vanquished Lord Oda for good, but with no land and no title, he has no hope of marrying Hana, the daughter of a daimyo. So when Taro receives news of a murderous dragon and the large reward for killing it, he and his friends find themselves on a dangerous quest to slay the beast.     Their mission has the potential to save the people of Japan—but failure will result in the deaths of thousands. And dragons are not the only monsters they will encounter: The dead, led by the odious Kenji Kira, have begun to rise, and they have Taro in their sights.     In this heart-stopping conclusion to the Blood Ninja trilogy, the future of all feudal Japan is in danger, and everything Taro holds dear will be threatened. But it is the betrayal of flesh and blood—his own flesh and blood—that may be his ultimate undoing.

When the bear wants to spend the afternoon photographing birds, the exuberant cowboy inadvertently makes a nuisance of himself as he loudly chews bubble gum, hops on a pogo stick and slurps a pop. When the ninja just wants to read quietly, the cowboy is wildly distracting as he drums on rocks, bats a paddleball and gabs on his cell phone. The cowboy’s boisterous mood prompts the ninja and the bear to drop their respective activities, leaving their pal alone to wonder why no one wants to be with him. Can he find the peace and quiet he needs to figure it out?

June 1613.  Japan is threatened with war and Jack Fletcher is facing his greatest battle yet. Samurai are taking sides and, as the blood begins to flow, Jack’s warrior training is put to the ultimate test. His survival – and that of his friends – depends upon him mastering the Two Heavens, the secret sword technique of the legendary samurai Masamoto Takeshi. But first Jack must recover his father’s prize possession from the deadly ninja Dragon Eye. Can Jack defeat his ruthless enemy? Or will the ninja complete his mission to kill the young samurai…

Is Taro, a fisherman’s son, destined for greatness? In the course of a day, Taro’s entire life changes: His father is murdered before his eyes, and Taro is taken by a mysterious ninja on a perilous journey toward safety. Someone wants Taro dead, but who — and why? With his best friend, Hiro, and their ninja guide Shusaku, Taro gets caught in the crossfire of a bitter conflict between rival lords for control of imperial Japan. As Taro trains to become a ninja himself, he’s less and less sure that he wants to be one. But when his real identity is revealed, it becomes impossible for Taro to turn his back on his fate. 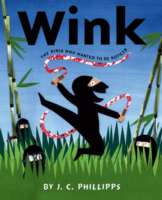 The happiest day of Wink’s life was when he was accepted to the Summer Moon School for Young Ninjas. He is sure that he will be a great ninja. Silence is the first lesson and everyone is very very silent except for Wink. Stealth is the second lesson and everyone is very very stealthy except for Wink. Finally, Wink decides that he will be silent and stealthy, but he realizes that no one can realize that he is a great ninja. Eventually, he finds that his acrobatic skills are a perfect match to be a circus performer.