Recovering from a shooting and stereotyped as a Chicano gangbanger, fourteen-year-old Victor Reyes loves reading books, has a genius girlfriend and an art teacher who mentors and encourages him to apply to art schools, but Victor cannot seem to overcome society’s expectations for him. 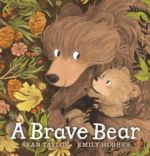 Little Bear tries to impress his Dad by doing a big jump from one rock to another, but he falls over. When he picks himself up and keeps going, his dad says, “I think a brave bear is probably the bravest thing in the world.”

Vicky has always felt responsible for her mentally disabled twin sister, Rhianna, and their feisty little brother, Jamie. So when the foster care system threatens to split them up, they all run away together, heading for a distant relative’s home. After a difficult journey, they arrive only to find strangers living there. With nowhere else to go, they hide in a cave, and must survive by their wits. By the end of their adventure, Vicky is surprised to find that the sister she thought she was protecting is the one who saves her. This touching, funny, fast-paced novel was short listed for the Waterstone’s Children’s Book Prize. Vicky and Rhianna’s engaging dual-perspective narration offers a refreshing view of people with disabilities, and their wild adventure and fierce family bond will resonate with readers.

Tengo is the 10-year-old son of workers on Oom Koos’s large farm in the Transvaal. He longs to go to school like his friend Frikkie, who visits his uncle’s farm on holidays. But Tengo’s family is too poor to pay for the education that comes free to whites. He finally gets his wish at age 14. Tengo goes to live with his cousin in a squalid township outside Johannesburg and studies furiously. After three years, he is almost ready for college, but a year-long school boycott ruins his chances and he is drawn into the fight against apartheid. When he and Frikkie meet in a violent confrontation, Tengo realizes that he will carry on the struggle for freedom as a scholar, not a soldier. The writing here is powerful, evoking in minute detail daily life and the broad landscapes of the country.

Flightsend is Charlie’s new home, whether she likes it or not. Her mother sees it as an end to all that’s gone so tragically wrong. They had been a proper family. Mum; her boyfriend, Sean; and Charlie, with a new baby sister on the way. But the baby died before she was born and everything changed. Gradually, Charlie’s mother pushed Sean away, before resigning from her job and selling the house. Charlie is certain that the move to a ramshackle cottage, miles from anywhere, can only make things worse. She couldn’t be more wrong. For Charlie’s mum there’s a new business and the fresh start that she knew she needed. And for Charlie there’s a new job, new friends, a newly discovered talent for art, and new feelings for two very different men. It’s a summer of beginnings, not ends; a summer that Charlie will never forget.

The international award-winning story of two girls from different backgrounds, united in friendship Parisian teenager Lou has an IQ of 160, OCD tendencies, and a mother who has suffered from depression for years. But Lou is about to change her life—and that of her parents—all because of a school project about homeless teens. While doing research, Lou meets No, a teenage girl living on the streets. As their friendship grows, Lou bravely asks her parents if No can live with them, and is astonished when they agree. No’s presence forces Lou’s family to come to terms with a secret tragedy. But can this shaky, newfound family continue to live together when No’s own past comes back to haunt her? Winner of the prestigious Booksellers’ Prize in France, No and Me is a timely and thought-provoking novel about homelessness that has far-reaching appeal.

A young boy finds hope when he is given an old soccer ball to play with in the wake of Haiti’s devastating earthquake.

Graciela’s Papi has been working in the United States for so long that she has almost forgotten his face, so when the box he promised for her seventh birthday does not arrive, she is very upset and nearly loses hope that he–and the rain–will someday ret.