Life is becoming dangerous for the Jews of Krakow in 1936 with incidents of violence and persecution increasing day by day. Twelve-year-old Anna begs her father to leave Poland, but he is reluctant to give up his position as an acclaimed clarinetist in the Krakow Philharmonic Orchestra. After barely escaping from an attack by a group of violent thugs, it becomes clear that the family must leave. Anna’s father auditions for the famous Bronislaw Huberman, a world renowned violinist, who is searching for Jewish musicians to play in a new orchestra in Palestine. This poignant story is based on real events in pre-war Poland and Palestine. After saving 700 Jews and their famiies, Bronislaw Huberman went on to establish what later became the Israel Philharmonic Orchestra.

Liberated from Bergen-Belsen Concentration Camp in 1945, sixteen-year-old Gerta tries to make a new life for herself, aided by Lev, a fellow survivor, and Michah, who helps Jews reach Palestine. 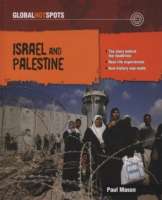 This volume discusses the highlights of the Israel and Palestine conflict.