In 1722, after arriving with her brother at the family’s Jamaican plantation where she is to be married off, sixteen-year-old Nancy Kington escapes with her slave friend, Minerva Sharpe, and together they become pirates traveling the world in search of treasure.

Tom O’Connor, a poor, adventurous boy lives with his mother and half sister at a tavern on the island of Nevis in 1639. He rescues a slave from drowning, learns he is prince, loses him, travels the Southern Hemisphere in search of him, and finally brings him home to Cape Verde, hoping for a grand reward. But by the time Tom discovers that the prince is really a fisherman’s son, the loss of reward doesn’t matter-his adventures have brought him no use for greed, and as he says, “a reckless regard for other people’s life and well-being.”

Relates the life experiences, from birth to beginning boarding school, of a boy growing up on a rubber plantation in rural Malaysia. 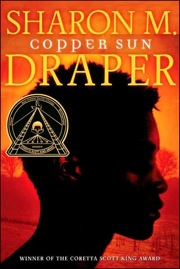 Two fifteen-year-old girls — one a slave and the other an indentured servant — escape their Carolina plantation and try to make their way to Fort Moses, Florida, a Spanish colony that gives sanctuary to slaves.