For eleven-year-old Gopal and his family, life in their rural Indian village is over: We stay, we starve, his baba has warned. With the darkness of night as cover, they flee to the big city of Mumbai in hopes of finding work and a brighter future. Gopal is eager to help support his struggling family until school starts, so when a stranger approaches him with the promise of a factory job, he jumps at the offer. But Gopal has been deceived. There is no factory, just a small, stuffy sweatshop where he and five other boys are forced to make beaded frames for no money and little food. The boys are forbidden to talk or even to call one another by their real names. In this atmosphere of distrust and isolation, locked in a rundown building in an unknown part of the city, Gopal despairs of ever seeing his family again. But late one night, when Gopal decides to share kahanis, or stories, he realizes that storytelling might be the boys’ key to holding on to their sense of self and their hope for any kind of future. If he can make them feel more like brothers than enemies, their lives will be more bearable in the shop—and they might even find a way to escape.

Full of heart and humor, this coming-of-age tale is no small thing — the tale of a boy’s search for love and identity in the face of longing, abandonment, and uncertainty.When twelve-year-old Nathaniel and his two sisters discover an ad in the paper for a free pony, they can hardly believe their luck. But what will their mother say? Mom’s been having a hard time ever since Dad walked out on them four years ago. But caring for a pony might keep Nat and his older sister, Cid, from bickering, and it would mean so much to eight-year-old Queenie. It takes some serious persuasion — and a promise to use Nat’s paper route money for the pony’s keep — but Mom finally relents.And so begins a year of self-discovery, as Nat struggles to deal with his father’s absence; look out for his younger sister, who is “different”; and recover from having his heart broken by a rich, pretty girl from school. Life is not always easy, but Nat knows that Smokey, his very own pony, will be waiting for him at the end of each day. Or will he?

The first graphic novel by the best-selling team of “Bluesman.” An emotionally powerful tale, drawn from the fabric of America itself, that follows the adventures of young Tucker Freeman as he is compelled to hop a train to escape from the crippling poverty of his rural existence. Armed with only fifteen cents and his occasional hobo father’s counsel, Tucker must find his place in this broken America of the Great Depression before the realities of being young, poor and homeless consume him. This new NBM/ComicsLit edition features a six-page conclusion/epilogue not feautred in the original release as well as a new two-color look, and will stand as THE defininitive edition of a book nominated for an Eisner is the Best Single Issue/One Shot category in 2002. An epic adventure recalling the works of Mark Twain, Jack London, and John Steinbeck.

Francisco misses his village in El Salvador, and especially flying a kite with his friends, but Mamá cannot afford to buy a kite so he gathers discarded materials around his apartment building and makes his own, which catches the eye of a store owner and leads to a wonderful project. 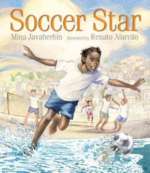 When Paulo Marcelo Feliciano becomes a soccer star, crowds will cheer his famous name! Then his mother won’t have to work long hours, and he won’t have to work all day on a fishing boat. For now, Paulo takes care of his little sister Maria (she teaches him reading, he teaches her soccer moves) and walks her to school, stopping to give his teammates cheese buns as they set out to shine people’s shoes or perform for the tourist crowd. At day’s end, it’s time to plan the game, where Givo will bounce, Carlos will kick, and Jose will fly! But when Jose falls on his wrist, will the team finally break the rules and let a girl show her stuff? Set in a country whose resilient soccer stars are often shaped by poverty, this uplifting tale of transcending the expected scores a big win for all.

Armando and his father are trash-pickers in Tijuana, Mexico, but when Senor David brings his “school”–a blue tarp set down near the garbage dump–to their neighborhood, Armando’s father decides that he must attend classes and learn. Based on a true story. 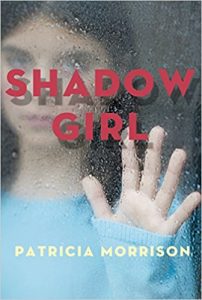 This novel for ages nine and up is the story of a resilient young girl who struggles as the daughter of an alcoholic father and an absentee mother. Left alone to fend for herself for days at a time, she is observed by a kind and compassionate saleswoman at the mall she retreats to every day after school to avoid going “home.” The saleswoman gains her trust and takes action into her own hands by reporting the girl’s situation to social services. She is placed in foster care, where she dreams of being reunited with her dad, despite the deprivations in her life with him. The relationship between the girl and her foster mother is painful, and the girl’s spirit disintegrates. Eventually, the saleswoman “adopts” the girl into her caring family, whose love and support enable her, finally, to believe in herself. 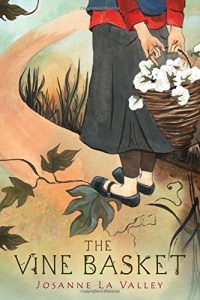 Life has been hard for fourteen-year-old Mehrigul, a member of the Uyghur tribal group scorned by the Chinese communist regime, so when an American offers to buy all the baskets she can make in three weeks, Mehrigul strives for a better future for herself and her family despite her father’s opposition.