A dazzling story told with the sensitivity, humor, and brilliant verse of debut talent Aida Salazar.

In England in 1346 Adrian has three problems: he is small for his twelve years, he is an albino, so people are suspicious of him, and his father wants him to be a scribe, while he wants to be an archer–but when he runs away to join his friend in the fight against the invading Scots, he learns that war can be a lot more complicated then he imagined.

Seventh-grader Alex Schrader’s life changes when he meets Bijou Doucet, a Haitian girl recently relocated to Brooklyn, and while he is determined to win her heart Alex also learns about dating rules and Haitian culture.

A how-to manual for girls approaching puberty, with tips to deal with all the changes in their bodies and minds. 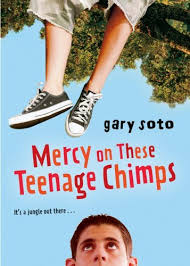 At age 13, best friends Ronnie and Joey suddenly feel like chimps–long armed, big eared, and gangly–and when the coach humiliates Joey in front of a girl, he climbs up a tree and refuses to come down. Gary Soto tells a touching story about friendship, understanding and the painful insecurities of being 13.