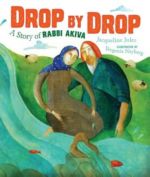 With his wife’s encouragement, a shepherd learns to read at age 40 and eventually becomes one of the greatest sages in Jewish history. 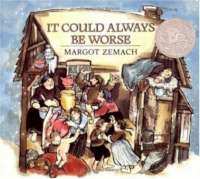 Once upon a time a poor unfortunate man lived with his mother, his wife, and his six children in a one-room hut. Because they were so crowded, the children often fought and the man and his wife argued. When the poor man was unable to stand it any longer, he ran to the Rabbi for help. As he follows the Rabbi’s unlikely advice, the poor man’s life goes from bad to worse, with increasingly uproarious results. In his little hut, silly calamity follows foolish catastrophe, all memorably depicted in full-color illustrations that are both funnier and lovelier than any this distinguished artist has done in the past.

A saintly rabbi miraculously brings to life a clay giant who helps him watch over the Jews of sixteenth-century Prague.