Columcille was born in a remote corner of Ireland in the year 521. Legend has it that as a child, he was fed a cake filled with the letters of the alphabet, and so learned to love writing. He grew up to become a monk and a scribe a thousand years before the invention of printing, when books had to be copied by hand. There was one book, a beautiful volume of psalms from distant Rome, that Columcille especially loved, and even though its owner refused him permission, Columcille secretly copied it. The copy was discovered, and a dispute arose over who it belonged to: Columcille, who made it, or the owner of the original. So better was the argument that a battle was fought between the two men’s powerful friends; although Columcille’s side won, the victory felt hollow to him. To punish himself, he set out in a tiny boat, vowing to leave Ireland forever.

Jaya’s Golden Necklace is the first children’s book to tell of the origin and cultural roots of the beloved Buddha image. A story of East and West, it teaches lessons and entertains while also opening a door into Asian culture. Set along the Silk Road, Jaya’s journey highlights the interconnected and multicultural worlds of yesterday and today. 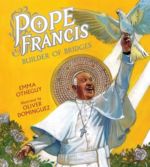 Pope Francis’s life and ground-breaking leadership are brought to life for young readers in this lyrical and inspirational picture book biography. 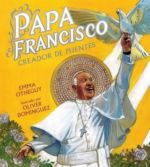 Leaving the palace where he had been sheltered from a prediction that destined him to be a holy man, Prince Siddhartha sees for the first time the suffering in the world, and begins the journey that transforms him into the Buddha.

A moving and eloquent fable from the 1998 winner of the Nobel Prize for Literature offers a unique blend of love and philosophy as a man petitions a boat from the king, finds a crew to volunteer, and sets sail to find an unknown island.