A dog is rescued after days afloat on a sheet of ice in the Baltic Sea.

Wallopa Wallaby enlists the help of Ranger Bugwatch, Ulinga the Aborigine, and animals of the Australian Outback when Wendi Wallaby is swept away by a tornado. 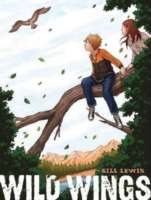 The majestic Osprey is an endangered bird that hasn’t been seen in Scotland for years, so when Iona McNair locates an Osprey nest, she’s desperate to keep the bird safe from poachers. She shares her secret with her classmate Callum, and the two become friends as they work to save the Osprey they’ve named Isis. They’re able to get the bird tagged by a preservationist, but after Isis flies to Africa for the winter, her signal becomes stagnant, then lost. Spurred by a promise to Iona, who has fallen ill, Callum is determined to track and save Isis, and a leap of faith and the magic of e-mail connects him with a girl in Gambia who can help him make good—in more ways than one. Set against the dramatic landscapes of Scotland and West Africa, this is a timeless tale of hope and friendship—a heartwarming novel infused with the beauty of nature.

When Floyd’s kite gets stuck in a tree, he’s determined to get it out. But how? Well, by knocking it down with his shoe, of course. But strangely enough, it too gets stuck. And the only logical course of action . . . is to throw his other shoe. Only now it’s stuck! Surely there must be something he can use to get his kite unstuck.

Facing the ultimate battle for control of the land she calls home, Eona finds herself waging an internal battle every bit as devastating as the war threatening to break out across the kingdom.

When the Hag of Dribble, an orphan boy, and a troll called Ulf are sent to rescue a princess from an ogre, it turns out to be far from the routine magical mission they expect.

They’d done it. Not only had Roz, Abby, Lance, and Thunder survived their first battle with a super villain, they’d defeated him. Krodin was dead, and they had saved the world. Now everything could go back to normal-good old, boring normal. School. Parents. Friends. But three weeks later, the world suddenly changes. The United States is under martial law, the people are little more than drones, and where Central Park should be there now stands a massive glass-and-steel building, home to the all-powerful Chancellor.