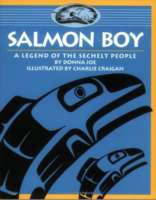 Simple and compelling First Nations drawings illustrate this dynamic story that teaches respect for the environment and describes the life cycle of the salmon.