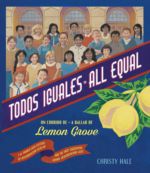 The story of the 1931 Lemon Grove incident, in which Mexican families in southern California won the first school desegregation case in United States history. Told in Spanish and English. Includes a corrido (ballad), and information about the people involved and events leading up to and after the court case ruling.

As a young boy in Gujarat, India, Kumar sometimes feels like he lives in two worlds. First there is the old world where people and their choices are determined by prejudice and bigotry. But then there is the second, modern world: in this world Kumar can be friends with whomever he chooses and his future looks bright. As part of the annual Diwali celebration, Kumar is invited to the house of his classmate Andal to watch fireworks. Andal is from a high-caste Brahmin family so Kumar is especially pleased to be included. But there in Andal’s house, Kumar’s two worlds collide in a very unpleasant way. Instead of being welcomed as a guest, Kumar is sent away, forbidden to join the festivities. Angry and hurt, Kumar is left questioning his place in Indian society. Where does he fit in? To which world does he really belong?

Fourteen-year-old Mateo and other Caribbean islanders face discrimination, segregation, and harsh working conditions when American recruiters lure them to the Panamanian rain forest in 1906 to build the great canal.

Born in 1944, José Angel Gutiérrez grew up in a time when Mexicans and Mexican Americans in Texas and the Southwest attended separate schools and avoided public facilities and restaurants that were designated “Whites Only.” Despite the limits of segregation and rural culture in Texas, the passion to learn and to educate others, as well as to undo injustice, burned in his belly from an early age. Gutiérrez offers portraits of his early influences, from his father’s own pursuit of knowledge and political involvement, to his Mexican pre-school teacher’s dedication to bilingual-bicultural education which did not exist in public schools at that time, and to his mother’s courage and persistence, taking up migrant field work to provide for her family after the death of young Gutiérrez’s father. In this intensely narrated memoir, Gutiérrez details his rise from being beaten down by racist political and agricultural interests in South Texas to his leadership role in the Chicano civil rights movement of the 1960s and 1970s. Complemented by photos from his personal archives, Gutiérrez recalls his struggle for education, his early baptism in grass-roots political organizing, and his success in creating one of history’s most successful third party movements, La Raza Unida Party. Along the way, Gutiérrez earned college and law degrees, as well as a Ph. D. in Political Science. He was elected or appointed to school boards, commissions, judgeships and party chairmanships, all with the single-minded purpose of extending equality to Mexican Americans and other minorities in the United States. Through his tireless efforts, he crossed paths with African American and Native American civil rights leaders, Mexican presidents, and other international figures.

We are the young people, We will not be broken! For almost fifty years, apartheid forced the young people of South Africa to live apart as Blacks, Whites, Indians, and “Coloreds.” This unique and dramatic collection of stories—by native South African and Carnegie Medalist Beverley Naidoo—is about young people’s choices in a beautiful country made ugly by injustice. Each story is set in a different decade during the turbulent years from 1948 to 2000, and portrays powerful fictional characters who are caught up in very real and often disturbing events.

For thirteen-year-old Kim, travel to South Africa with her journalist mother will mark the end of her childhood and the beginning of a remarkable journey. Expecting nothing more than three months in her mother’s homeland, Kim comes to terms with the country’s diverse and often shocking history. The Truth and Reconciliation Hearings in post-apartheid South Africa open her eyes to the tragedy and brutality of its segregationist policies.

Kim’s first meeting with her relatives, her contact with schoolmates and cousins, bring her face-to-face with the realization that she is not as removed from this powerful story as she thought. As her mother struggles with her past, Kim becomes more and more determined to unlock the secret that has always kept her from knowing her father. Helped by the young son of a long-time family servant, whose own father was a casualty of Apartheid history, Kim eventually unlocks her mystery and brings her mother and herself to their own truth and reconciliation.