Seventeen-year-old Xochi’s life changed when she became governess to precocious twelve-year-old Pallas, but the duo unintentionally summons a pair of ancient creatures determined to right the wrongs of Xochi’s adolescence.

Imprisoned for crimes she didn’t commit, sixteen-year-old Orpha accepts an unusual invitation to live in a Victorian home for fallen women and finds new hope.

Asking For It is a powerful story about the devastating effects of rape and public shaming, told through the awful experience of a young woman whose life is changed forever by an act of violence.

Noor has lived all of her fourteen years in the fifteen lanes of Mumbai’s red light district. Born into a brothel, she is destined for the same fate as her mother: a desperate life trapped in the city’s sex trade. She must act soon to have any chance of escaping this grim future.

Across the sprawling city, fifteen-year-old Grace enjoys a life of privilege. Her father, the CEO of one of India’s largest international banks, has brought his family to Mumbai where they live in unparalleled luxury. But Grace’s seemingly perfect life is shattered when she becomes a victim of a cruel online attack.

Teddy can’t believe how fast his life has changed in just two years. When he was twelve, his father took off, and then his mother married Henry, a man Teddy despises. But Teddy has no control over his life, and adults make all the decisions, especially in 1959. Henry decides that Teddy should be sent to St. Ignatius Academy for Boys, an isolated boarding school run by the Catholic church.
St. Iggy’s, Teddy learns, is a cold, unforgiving place — something between a juvenile detention center and reform school. The other boys are mostly a cast of misfits and eccentrics, but Teddy quickly becomes best friends with Cooper, a wise-cracking, Wordsworth-loving kid with a history of neglect. Despite the priests’ ruthless efforts to crack down on the slightest hint of defiance or attitude, the boys get by for a while on their wits, humor and dreams of escape. But the beatings, humiliation and hours spent in the school’s infamous “time-out” rooms, and the institutionalized system of power and abuse that protects the priests’ authority, eventually take their toll, especially on the increasingly fragile Cooper.
Then one of the new priests, Father Prince, starts to summon Cooper to his room at night, and Teddy watches helplessly as his friend withdraws into his own private nightmare, even as Prince targets Teddy himself as his next victim. 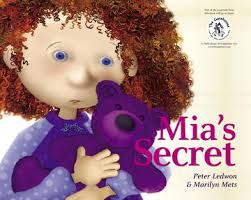 Mia is little and feeling utterly powerless. She has promised to keep a secret, but now this secret feels wrong. And now that she has played the secret game, she is frightened — frightened that “he” will be angry if she tells, frightened that no one will understand. Only her stuffed bear, Tikki, has seen everything and knows how much this secret hurts. He comes again and again. Mia tries to stop him, but now he’s angry with her. If only she hadn’t made the promise. Then, Mia has an idea. Tikki has promised nothing. Maybe Tikki can speak to her mother and stop the hurt at last.

When talented, dedicated fourteen-year-old Georgia Slade becomes a student in an elite Toronto ballet academy, her confusing feelings toward one of her teachers lead to disaster.

Passionate, compelling essays reveal how daughters see their fathers. Editor Melanie Little brings together seven outstanding women — including Susan Olding, Jessica Raya and Saleema Nawaz — to write brilliant, powerful accounts of father-daughter relationships during their teen years. These deeply personal narratives draw readers into raw, real-life experiences. One girl recalls the parade of men in her mother’s life until a man named Al unexpectedly becomes the father she never had. Another father’s abandonment leads his teen daughter to enter a string of doomed relationships with older men, fueled by her “pilot light of pure hatred.” Another reveals the harrowing secret she guarded as a teen: the sexual abuse she suffered at the hands of her father. One girl watches as the father she loves and respects struggles on the picket lines during a lockout at work and through an ensuing depression. Another daughter charts her own reckless behavior against that of her father’s, in search of a way to break the cycle. Gutsy and honest, these true stories invite readers behind secret doors as they celebrate the power of words to connect to the teen experience.