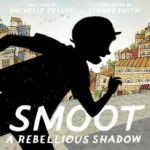 After Smoot the shadow comes unstuck from his boy, he has a wild time that inspires other shadows to live out their dreams.

One winter night, the shadows are interrupted at their games as the Shadowland watchman sees a poor little match girl standing barefoot in the snow in a town in the real world. Deserting his post, he dashes to her rescue, lighting match after match to keep the girl warm. But matches bring shadows, and soon the two worlds–of people and of shadows–are in an uproar, and the watchman and the little match girl must run for their lives.

Shadow lives in the forest… It goes forth at night to prowl around the fires. It even likes to mingle with the dancers… Shadow… It waves with the grasses, curls up at the foot of trees… But in the African experience Shadow is much more. The village storytellers and shamans of an Africa that is passing into memory called forth for the poet Blaise Cendrars an eerie image, shifting between the beliefs of the present and the spirits of the past. Shadow… It does not cry out, it has no voice… It can cast a spell over you… It follows man everywhere, even to war… Marcia Brown’s stunning illustrations in collage, inspired by her travels in Africa, evoke the atmosphere and drama of a life now haunted, now enchanted by Shadow.