A young boy finds hope when he is given an old soccer ball to play with in the wake of Haiti’s devastating earthquake.

Real-life pro soccer player, Ethan Zohn, explains what it is like to play soccer in Africa, focusing on the culture and geography of the country.

What’s a girl to do when Mom and Dad announce that the whole family is moving to Scotland for a yearlong teacher exchange? Can you spell d-i-s-a-s-t-e-r? When Andrea gets there, she finds she and her family are living with the principal and she is being pestered by the ultraweird Jasmin. But then she finds an amazing girls’ soccer league and a cute boy named Stewart. Will Andrea’s new tough soccer girls accept that she is crushing on a boy from a rival team and not totally devoted to winning a championship? Perfect for fans of Lauren Myracle.

A lyrical, strikingly illustrated story celebrates the unifying power of soccer. In a dusty township in South Africa, Ajani and his friends have earned a brand-new, federation-size soccer ball. They kick. They dribble. They run. They score. These clever boys are football champions! But when a crew of bullies tries to steal their ball, will Ajani and his friends be able to beat them at their own game? 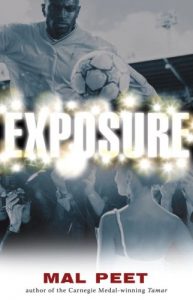 Carnegie Medalist Mal Peet takes a searing look at the world of soccer and pop-celebrity culture — and the lives of three street kids caught in its glare. When a black South American soccer star signs on to a team in the country’s racist south, headlines blare. And when he falls for the sensual Desmerelda, a stunning white pop singer and daughter of a wealthy politician, their sudden and controversial marriage propels the pair to center stage, where they burn in the media spotlight. But celebrity attracts enemies; some very close to home. And its dazzle reaches into the city’s hidden corners, exposing a life of grit and desperation the glitterati could never imagine. When a girl is found murdered, reporter Paul Faustino is caught between worlds as he witnesses the power of the media in making — and breaking — lives. Inspired by Shakespeare’s OTHELLO, this modern tragedy of desire and betrayal, incisively and compassionately told, is a truly enthralling work of crossover fiction. 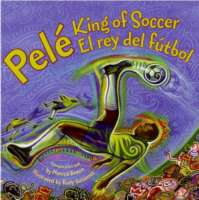 This book tells how a poor boy from Brazil who loved fútbol more than anything else became the biggest soccer star the world has ever known. 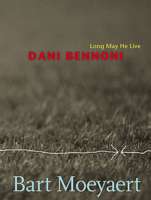 In Belgium in the summer of 1939, with his brother serving in the military, ten-year-old Bing asks his older neighbor, Dani, to repay a debt by teaching him to play soccer, but Dani refuses and sets Bing and his friend Lenny on a course for revenge. 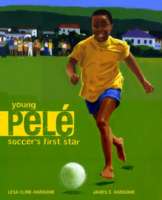 A poor boy named Edson, who kicked rocks down roads and dribbled balls made from rags, went on to become the greatest soccer player of all time. While other kids memorized letters, Edson memorized the scores of soccer matches. And when Edson finally played in a youth soccer tournament in Bauru, Brazil, he focused on only one thing from the moment the whistle blew–the goal. The story of the boy who overcame tremendous odds to become the world champion soccer star Pelé. 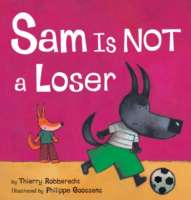 Sam loves to play games—but he doesn’t like to lose. So when his soccer team is playing against a team of bigger kids, Sam decides not to play. But if he doesn’t even play, how can he ever win?