International Collection of Children's and Adolescent Literature
College of Education
University of Arizona 1430 East Second Street
Tucson, AZ 85721
Phone: (520) 621-9340
email: wow@email.arizona.edu
Open Reading Hours: Monday through Friday – 9 a.m. to 5 p.m., Saturday – 9 a.m. to 1 p.m.
Britain, 480 AD. Saxon barbarians are invading, pushing the civilized British out of their own island. Morgan is the daughter of the governor of Cornwall. But when her father is murdered and her mother taken as the Uther Pendragon’s new wife, she has to flee to Ireland to avoid being murdered herself.
But Ireland is no refuge. She’s captured in a slave raid and sold to a village witch. As Morgan comes of age, she discovers her own magical powers. She falls in love with a young Irish chieftain, and makes him powerful. But will her drive for revenge destroy her one chance for love and happiness? 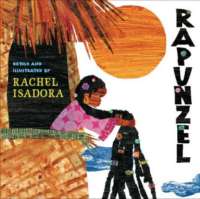 Caldecott Honor winner Rachel Isadora’s gorgeous collages breathe new life into this classic tale, capturing Rapunzel’s striking beauty and the lush African setting—a new home for this story—with wonderful details such as Rapunzel’s long dreadlocks and the prince’s noble steed—a zebra. Readers will delight in the vibrant illustrations, thrill at the appearances of the frightening sorceress, and chime in with the familiar line “Rapunzel, Rapunzel, let down your hair,” as they follow this well-loved tale.

The sorceress Lady Lamorna wants a skull-studded gown of deep black velvet, but her treasure chest is empty of gold. That doesn’t stop her, however — from kidnapping, blackmailing, and using more than a little magic to get what she needs. Will her plans be foiled by the heroic Gracie Gillypot, two chatty bats, a gallant (if scruffy) prince, the wickedest stepsister ever, a troll with a grudge, and some very ancient crones?