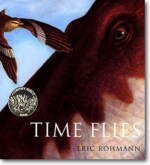 Time Flies , a wordless picture book, is inspired by the theory that birds are the modern relatives of dinosaurs. This story conveys the tale of a bird trapped in a dinosaur exhibit at a natural history museum. Through Eric’s use of color, readers can actually see the bird enter into a mouth of a dinosaur, and then escape unscathed.

Join the discussion of Time Flies as well as other books centered around relocation on our My Take/Your Take page.

One shocking afternoon, computers around the globe shut down in a viral catastrophe. At sixteen-year-old Adam Daley’s high school, the problem first seems to be a typical electrical outage, until students discover that cell phones are down, municipal utilities are failing, and a few computer-free cars like Adam’s are the only vehicles that function. Driving home, Adam encounters a storm tide of anger and fear as the region becomes paralyzed. Soon—as resources dwindle, crises mount, and chaos descends—he will see his suburban neighborhood band together for protection.

Describes the life of the English girl whose discovery of an Ichthyosaurus fossil led to a lasting interest in other prehistoric animals.

An account of the finding of the first entire skeleton of an ichthyosaur, an extinct sea reptile, by a twelve-year-old English girl who went on to become a paleontologist. 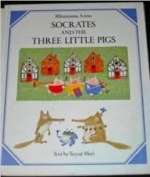 Jurassic Park meets virtual gaming in a blockbuster new thriller! You’re 14 and find yourself on your own. Your father, who has developed the worlds cutting edge research on virtual electronic game-playing, has been missing for weeks. And suddenly you’re being hunted by men with guns, your picture is on the news, and, worst of all, something seemingly impossible is chasing youa savage, man-eating dinosaur. How can that be? Why is everyone trying to capture you? And what is your strange connection with this 21st-century prehistoric monster? Steve Cole has created an absurdly gripping and kid-friendly thriller that will capture imaginations. If Jurassic Park were to meet Alex Rider, the result might well be this irresistible new novel.

In a Brazil of the distant future, June Costa falls in love with Enki, a fellow artist and rebel against the strict limits of the legendary pyramid city of Palmares Três’ matriarchal government, knowing that, like all Summer Kings before him, Enki is destined to die.

In Mayda, a post-apocalyptic city off the coast of Portugal, a brilliant young engineer and a mysterious recluse race to build a flying machine, unaware that powerful enemies will kill to possess–or destroy–their new technology.