Clever, headstrong Elizabeth Rose Camperdowne knows her duty. As the sole heiress to an old but impoverished noble family, Eliza must marry a man of wealth and title — it’s the only fate for a girl of her standing. But when a surprising turn of events lands her in the royal court as a maid of honor to Anne of Cleves, Eliza is drawn into the dizzying, dangerous orbit of Henry the Eighth and struggles to distinguish friend from foe. Is her glamorous flirt of a cousin, Katherine Howard, an ally in this deceptive place, or is she Eliza’s worst enemy? And then there’s Ned Barsby, the king’s handsome page, who is entirely unsuitable for Eliza but impossible to ignore.

Ten-year-old Siri and her little sister Miki live with their elderly father in an Arctic archipelago. One day, while they are out gathering snowberries, Miki is abducted by Captain Whitehead. Everyone knows the story about Captain Whitehead, a pirate with hair white as snow and heart as empty as an ice cave. All he wants is children, the smaller the better. They say Whitehead has a diamond mine, a great chasm in the earth. To be taken to that mine is the worst thing that can happen to a child. To prevent her father from risking his life to find Miki, Siri sets out to find her sister by herself. In Siri’s adventure on the seas she will encounter wolves, sailors, mermaids, profound evil, and true humanity. The Ice Sea Pirates is a classic children’s adventure and a humane story of sisterhood, friendship, and courage.

Like the classic heroines of Sarah, Plain and Tall, Little Women, and Anne of Green Gables, Ada is a fighter for the ages. Her triumphant World War II journey continues in this sequel to the Newbery Honor–winning The War that Saved My Life.

Legendary author Shirley Hughes draws on her young teenage memories for a compelling novel of friendship and mysteries set in Liverpool during the Blitz.

In an alternate United Kingdom, King Snodd aims to control the world by controlling magic, and only sixteen-year-old Jennifer Strange, acting manager of an employment agency for sorcerers, stands between Snodd and his plans.

Aerin, with the guidance of the wizard Luthe and the help of the blue sword, wins the birthright due her as the daughter of the Damarian king and a witchwoman of the mysterious, demon-haunted North.

Cora, Nellie, and Michiko, teenaged assistants to three powerful men in Edwardian London, meet by chance at a ball that ends with the discovery of a murdered man, leading the three to work together to solve this and related crimes without drawing undue attention to themselves. 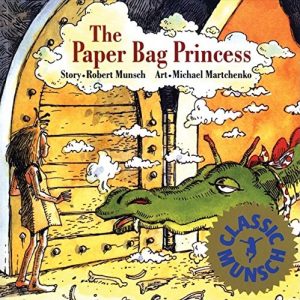 When a fierce dragon destroys her castle and clothes, and carries off the prince she was going to marry, a brave and resourceful princess cleverly outwits the dragon.

Unusual from the day she is born, Thunder Rose performs all sorts of amazing feats, including building metal structures, taming a stampeding herd of steers, capturing a gang of rustlers, and turning aside a tornado.

In the ruins of a place once known as North America lies the nation of Panem, a shining Capitol surrounded by twelve outlaying districts. The Capitol is harsh and cruel and keeps the districts in line by forcing them all to send one girl and one boy between the ages of twelve and eighteen to participate in the annual Hunger Games, a fight to the death on live TV. Sixteen-year-old Katniss Everdeen, who lives alone with her mother and younger sister, regards it as a death sentence when she is forced to represent her district in the Games. But Katniss has also resolved to outwit the creators of the games. To do that she will have to be the last person standing at the end of the deadly ordeal, and that will take every ounce of strength and cunning she has.