Winning a national high-school geography competition should be the high point of Jomon’s life. So why does he find himself running through the streets of Georgetown, Guyana, later that same night ― so angry and desperate? Why does he heave his hard-won medal through the front window of a liquor store?
Why does a teenaged boy decide life is not worth living?
Arrested by police and detained in a jail cell, Jomon is jolted out of his suicidal thoughts by the sudden appearance of another teenaged boy ― who claims to be his great-great-grandfather …

Elizabeth Davis and Emily Daniels seem to have little in common except Ms. Diaz’s English class and the solace they find in the words of Emily Dickinson, but both are struggling with to cope with monumental secrets and tumultuous emotions that will lead one to attempt suicide.

Francis Meredith is a boy who is interested in fashion and costuming, which has made him a target at school, but when he meets Jessica and Andi his life begins to change–Andi is an athletic girl with a reputation for fighting and family in the fashion business, and Jessica is a ghost who has no idea how she died.

Eleven-year-old Kaia, who has felt emotionally isolated since her brother’s suicide, befriends a wild boy who mysteriously appears at her London school, finding a way to communicate with him despite his being mute.

A young boy becomes friends with the artist in the apartment upstairs and tries hard to understand when his friend commits suicide.

A boy named Seth drowns, desperate and alone in his final moments, losing his life as the pounding sea claims him. But then he wakes. He is naked, thirsty, starving. But alive. How is that possible? He remembers dying, his bones breaking, his skull dashed upon the rocks. So how is he here? And where is this place? It looks like the suburban English town where he lived as a child, before an unthinkable tragedy happened and his family moved to America. But the neighborhood around his old house is overgrown, covered in dust and completely abandoned. What’s going on? And why is it that whenever he closes his eyes, he falls prey to vivid, agonizing memories that seem more real than the world around him? Seth begins a search for answers, hoping that he might not be alone, that this might not be the hell he fears it to be, that there might be more than just this.

17 year old, Tara McClusky’s life is hard. She shares the care of her paralysed father with her domineering, difficult mother, forced to cut down on her hours at school to help support the family with a part-time rest home job. She’s very much alone, still grieving the loss of her older sister Van, who died five years before. Her only source of consolation is her obsession with art and painting in particular. Most especially she is enamoured with Vincent Van Gogh: she has read all his letters and finds many parallels between the tragic story of his life and her own. Luckily she meets the intelligent, kindly Professor Max Stockhamer (a Jewish refugee and philosopher) and his grandson Johannes, and their support is crucial to her ability to survive this turbulent time. The book tackles the difficult topic of suicide fearlessly, with a novel that’s not afraid to go to the dark places but which resolves its story beautifully. 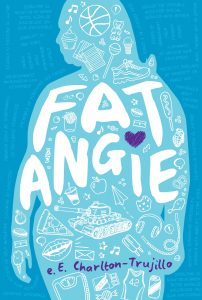 Angie is broken–by her can’t-be-bothered mother, by her high-school tormentors, and by being the only one who thinks her varsity-athlete-turned-war-hero sister is still alive. Hiding under a mountain of junk food hasn’t kept the pain (or the shouts of “crazy mad cow!”) away. Having failed to kill herself–in front of a gym full of kids–she’s back at high school just trying to make it through each day. That is, until the arrival of KC Romance, the kind of girl who doesn’t exist in Dryfalls, Ohio. A girl who is one hundred and ninety-nine percent wow! A girl who never sees her as Fat Angie, and who knows too well that the package doesn’t always match what’s inside. With an offbeat sensibility, mean girls to rival a horror classic, and characters both outrageous and touching, this darkly comic anti-romantic romance will appeal to anyone who likes entertaining and meaningful fiction.

Unable to control his binge eating, a morbidly obese teenager nicknamed Butter decides to make live webcast of his last meal as he attempts to eat himself to death.

Thirteen-year-old Henry’s happy, ordinary life comes to an abrupt halt when his older brother, Jesse, picks up their father’s hunting rifle and leaves the house one morning. What follows shatters Henry’s family, who are forced to resume their lives in a new city, where no one knows their past. When Henry’s therapist suggests he keep a journal, at first he is resistant. But soon he confides in it at all hours of the day and night.

In spite of Henry’s desire to “fly under the radar,” he eventually befriends a number of oddball character, both at school and in his modest apartment building. And even though they know nothing about his past–at least, not yet–they help him navigate the waters of life after “IT.”