They killed my mother. They took our magic. They tried to bury us. Now we rise. Zélie Adebola remembers when the soil of Orïsha hummed with magic. Burners ignited flames, Tiders beckoned waves, and Zélie’s Reaper mother summoned forth souls. But everything changed the night magic disappeared. Under the orders of a ruthless king, maji were killed, leaving Zélie without a mother and her people without hope. Now Zélie has one chance to bring back magic and strike against the monarchy. With the help of a rogue princess, Zélie must outwit and outrun the crown prince, who is hell-bent on eradicating magic for good. Danger lurks in Orïsha, where snow leoponaires prowl and vengeful spirits wait in the waters. Yet the greatest danger may be Zélie herself as she struggles to control her powers and her growing feelings for an enemy.

Children of Blood and Bone is the WOW Recommends: Book of the Month for August 2018 and is reviewed in Volume 11, Issue 3 of WOW Review: Reading Across Cultures.

Tess Dombegh journeys through the kingdom of Goredd in search of the World Serpents and finds herself along the way.

Penny Nelson must face three dangerous tasks in order to stabilize the magical island of Tamarind and keep some of the magic for her own use.

It’s been four years since Maya, Simon, and Penny Nelson left the lost island of Tamarind. For Maya, the island is a nearly forgotten part of her childhood; for Penny, it’s a secret place she can’t remember, but longs to see; and for Simon, it’s an adventure waiting to happen. An evil group called the Red Coral Project is lurking around the Nelson’s home in Bermuda, and the children discover that the project has moved into Tamarind, and are desiccating it to ruin. Only the Nelson’s can save the island. In Tamarind, there is the mystery of the magical mineral ophalla that Red Coral is greedily mining, their old pirate ship, the Pamela Jane, and the secret of their friend Helix’s parentage. This time, it is up to Simon to put the clues together, and save his sisters from the island and the nefarious Red Coral Project—and defeat Red Coral before the magnificent island is put to ruin. Nadia Aguiar’s sequel to The Lost Island of Tamarind, crafts a vivid story reminiscent of such classics as Peter Pan, full of adventure, magic, and haunting beauty.

Aerin, with the guidance of the wizard Luthe and the help of the blue sword, wins the birthright due her as the daughter of the Damarian king and a witchwoman of the mysterious, demon-haunted North. 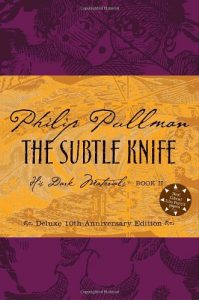 PUBLISHED IN 40 COUNTRIES, with over 5 million copies in print in North America alone, Philip Pullman’s His Dark Materials trilogy –The
Golden Compass, The Subtle Knife, and The Amber Spyglass – has graced the New York Times, Wall Street Journal, San Francisco Chronicle, Book Sense, and Publishers Weekly bestseller lists. For these deluxe editions, Philip Pullman has created new material: papers of Colonel John Parry for the 10-year anniversary of The Subtle Knife (15 new pages), and letters of Mary Malone from secret Magisterium files for The Amber Spyglass (10 new pages). In each book, the new material has been illustrated and handlettered by renowned artist Ian Beck and will be included in the backmatter.

Each deluxe edition also features a ribbon bookmark, rough-edged pages, and Pullman’s own chapter-opening spot art. These two volumes join the 2006 deluxe edition of The Golden Compass to form a gorgeous collectible set of the trilogy – a perfect gift for loyal Pullman readers and new fans alike. The Golden Compass debuts as a New Line major motion picture starring Nicole Kidman in December 2007.

Rebelling against the order that forbids her to use her special powers, which enable her to make her thoughts real, Princess Lenora runs away from an unwanted marriage and falls prey to the fierce tyrant Hevak.