Lost in the Black Forest, Otto meets three mysterious sisters and finds himself entwined in a prophecy, a promise, and a harmonica–and decades later three children, Friedrich in Germany, Mike in Pennsylvania, and Ivy in California find themselves caught up in the same thread of destiny in the darkest days of the twentieth century, struggling to keep their families intact, and tied together by the music of the same harmonica.

Join the discussion of Echo as well as other books centered around relocation on our My Take/Your Take page.

Good. Evil. Dangerous. Glamorous. Will the real Cleopatra please stand up? Almost everything we know about the last queen of Egypt came from her enemiesthe Romans. Now its time to meet the real Cleopatra, a ruler more complex, brilliant, and powerful than we ever knew. Cleopatra didnt just rock the boat when she became queen at seventeen. She rocked the world with brilliant alliances that kept her in power and in control. When Mark Antony tried to put Egypt under his thumb, she negotiated forand wonmore territory than any Egyptian ruler had snagged in generations. Cleopatra didnt just play by the rules. She made them up as she went along. She bowed to no one, including Octavianthe future Caesar Augustuswho never missed an opportunity to pump out anti-Cleopatra propaganda. The queen of Egypt has fascinated the world for thousands of years. Its time to find out why. 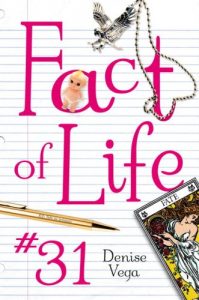 FACT OF LIFE #48: Kat’s mom is No-Last-Name Abra, the best home-birth midwife in Colorado. But with her own daughter, Abra can’t stop teaching and lecturing long enough to be a mom.Fact of Life #21: Kat’s had a crush on Manny Cruz since seventh grade. Now Manny is showing interest , but could he seriously be into Weird Yoga Girl Kat Flynn?Fact of Life #14: Gorgeous Libby Giles has always intimidated Kat. But lately there’s something different about Libby, and it’s about to bring her crashing into Kat’s Life. . . .Hilarious and poignant, this is the story of one girl’s sometimes funny, sometimes painful path to self-acceptance and to finding her place in the world.

Miguel and RamÃ³n are in big trouble with their family. The cousins were almost expelled from school for fighting, and just as they’re finishing up their final year in middle school and preparing to enter high school, their grades have dropped. Miguel’s father Rodrigo who, with his wife Connie, has raised RamÃ³n since his father’s tragic death in a car accident has decided the boys need to be punished. So instead of going on the family’s summer vacation to Santa Fe, they’ll stay with their Abuelita Rosa in a remote town in northern Arizona and do chores around her place.Dreading a long, boring month with their grandmother in the middle of nowhere, the boys get started on the extensive list of tasks they are supposed to complete. Cleaning the shed seems like the least disagreeable one, and soon they find something interesting: a two-wheeled Vespa scooter covered with dust and cobwebs. Excited at their find, the boys decide fixing the scooter might enliven their stay. If they can get it to run, they’ll at least be able to get around town.The next morning, though, Miguel and RamÃ³n wake to a quiet house, and they’re shocked to find their grandmother unconscious in her bed. When the ambulance takes her away to the hospital, the boys are left alone and unable to contact Miguel’s parents. Suddenly, the scooter seems to be the only answer to reaching their family, and so the boys gather food, water, sleeping bags, and the small amount of money they have and begin the long trip to New Mexico.Miguel and RamÃ³n quickly learn that traveling across the country isn’t as easy as they had expected. Sharing the road with fast-moving eighteen-wheelers and camping in the cold desert all make for an exhausting trip. But along the way the boys see many wonderful sights including the Grand Canyon and the red rocks of Sedona and meet lots of interesting people: Frank, an old friend of their grandfather’s who helps them get the scooter ready for the trip; Turner, an attentive youth group counselor they meet at the Grand Canyon; and a group of scientists exploring an ancient Native American site. Most importantly, Miguel and RamÃ³n will discover a lot about themselves through their growing independence as emergent young men.

The Dane as never seen before — in a daring, dazzling, sexy prose retelling of Shakespeare’s tragedy by best-selling author John Marsden.Something is rotten in the state of Denmark, but Hamlet can’t be sure what’s causing the stench. His rage at his mother’s infidelities — together with his greed for the sensual Ophelia and his dead father’s call to revenge a “murder most foul” — have his mind in chaos, and he wants to scatter his traitorous uncle’s insides across the fields. But was it really his father’s ghost that night on the ramparts, or a hell-fiend sent to trick him? “Action is hot,” he tells Ophelia, who lives shut up in a tower with her longings and lust. “Action is courage, and reflection is cowardly. Picking up the knife has the colors of truth. As soon as I hesitate. . . .” In this dark, erotically charged, beautifully crafted novel, John Marsden brings one of Shakespeare’s most riveting characters to full-blooded life in a narrative of intense psychological complexity.