When twelve-year-old Manny Maldonado and his friends find a hobo’s body near the train tracks that run through their tight-knit San Gabriel valley community, a police officer tries to pin the murder on them.

Unable to control his binge eating, a morbidly obese teenager nicknamed Butter decides to make live webcast of his last meal as he attempts to eat himself to death.

This is the first book in a new epic trilogy that has already become a bestselling sensation in England and Australia, earning comparisons to The Lord of the Rings. It begins with the legend of a nightingale floor in a black-walled fortress-a floor that sings in alarm at the step of an assassin. It will take true courage and all the skills of an ancient Tribe for one orphaned youth named Takeo to discover the magical destiny that awaits him…across the nightingale floor.

“You never know where this life will take you,” Henry Olsen tells Laker Wyatt when he finds the boy could, penniless, and sleeping on the street. Raised by his hapless, childlike mother, Laker has often had to act more like a caretaker than a son. It’s become easy for him to soothe her with a cup of tea or fake a phone call to her boss on a bad day. But when stepfather number two, Rick the Prick, comes on the scene, everything changes. After Laker fights with Rick, his mother, Audrey, does the unimaginable: She kicks her son out. Drifting aimlessly, Laker meets Henry, eighty-three, a widower with family troubles of his own. Being with Henry brings its own challenges, as well as surprises. How these two disparate souls — an angry, homeless teenager and a lonely, crotchety old man — come to know and care for each other makes a sometimes funny, often poignant, and ultimately moving novel about truth and family and the courage it takes to search for these in unexpected places. 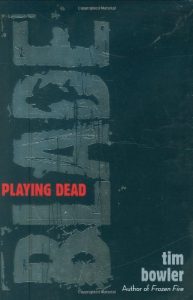 Nobody knows the city like Blade. You have to when you’re on your own, when you can’t trust anyone, when you’ve got a past you need to hide. Blade is practically invisible, perfectly alone, living only by his wits—just the way he likes it. Until the day a chance encounter sends his world crashing down around him and he finds himself on the run again. Yet he’s not alone this time. Suddenly he’s got Becky and her daughter, Jaz, weighing him down. But is he running from his past or from Becky’s? Blade knows he should drop these two, but he can’t. With people depending on him, he’ll need to find a way to outsmart the thugs who are hot on both of their heels, lurking around every corner. The suspense is palpable in Carnegie-Medal winner Tim Bowler’s new thriller.

Lord Otori, Takeo, and Takeo’s new teacher Kenji meet Kaede who was chosen as the future Lady Otori by a group of political partners. Takeo is still trying to come to terms with knowing that he is one of the Tribe—a group of mysterious, ninja-like assassins. When Takeo and Kaede first meet, they get attracted to each other.