A sobering perspective of what it was like to be forced on the Navajo Long Walk, one of our nation’s most traumatizing events. Ninaanibaa’, the young woman whose family the story centers on, is the heart of the novel. Two of her young daughters are kidnapped prior to removal. Through the love of her warrior husband, Haske Yil Naanaah, she never gives up hope of reuniting again with her daughters.

A clever little dog christens himself “Sad” when his humans fail to give him a name. Although they feed him and wash him, they don’t appreciate his many gifts, like his love of singing (“stop that yapping!”). When the people move away and leave Sad behind, Sad is heartbroken. But then a new family with a young boy arrives at Sad’s house in a big truck. Although Sad is initially frightened, it soon becomes clear that the boy is just the right person to make a dog’s life complete with playtime, treats, and a brand-new name: Lucky. 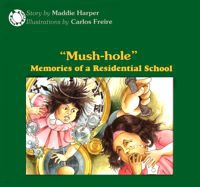