A bilingual collection of humorous trickster tales, in which women pit their formidable intelligence to outwit villains, husbands, brothers, fathers, and sweethearts. From the kind woman who tricked two men who thought they had robbed her of a ham to the woman who saved her gold by tricking her foolish husband into thinking it had snowed tortillas, these tales cultivate lessons of honesty, goodness, hospitality, and honor―not to mention intelligence and wit to survive. As Joe Hayes points out, People the world over tell stories of a humble individual tricking an overbearing person of higher status, but the idea is especially cherished in Hispanic storylore. Making the trickster a woman adds spice to the trick.

Magnus and his friends set sail for the farthest borders of Jotunheim and Niflheim in pursuit of Asgard’s greatest threat, Loki’s demonic ship full of zombies. 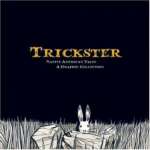 All cultures have tales of the trickster—a crafty creature or being who uses cunning to get food, steal precious possessions, or simply cause mischief. He disrupts the order of things, often humiliating others and sometimes himself. In Native American traditions, the trickster takes many forms, from coyote or rabbit to raccoon or raven. The first graphic anthology of Native American trickster tales, Trickster brings together Native American folklore and the world of comics. 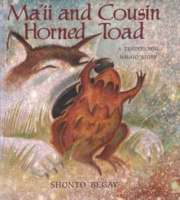 A lazy, conniving coyote takes advantage of his animal cousins until a horned toad teaches him a lesson he never forgets. A Navajo folktale.

In this retelling, using Gullah speech, of a familiar story the wily Brer Rabbit outwits Brer Fox who has set out to trap him.

Without a penny to his name, Malese takes advantage of his neighbors using his tricky ways, until they catch on, after which he manages to pull an even bigger trick on them. 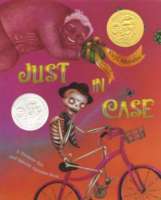 TWO-TIME PURA BELPRÉ WINNER Yuyi Morales takes us on a new journey with Señor Calvera, the skeleton from Day of the Dead celebrations. Señor Calvera is worried. He can’t figure out what to give Grandma Beetle for her birthday. Misunderstanding the advice of Zelmiro the Ghost, Señor Calvera decides not to get her one gift, but instead one gift for every letter of the alphabet, just in case. Una Acordéon: An accordion for her to dance to. Bigotes: A mustache because she has none. Cosquillas: Tickles to make her laugh…only to find out at the end of the alphabet that the best gift of all is seeing her friends. Morales’s art glows in this heart-warming original tale with folklore themes, a companion book to her Pura Belpré-winning JUST A MINUTE. 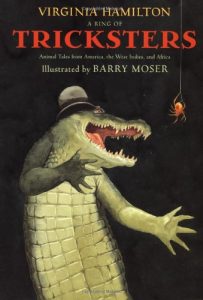 Newbery Medalist Virginia Hamilton and National Book Award-winner Barry Moser join forces to tell 11 humorous trickster tales from the story ring of the slave trade. Following the migration of stories during the Plantation Era, Hamilton presents readers with a fascinating history of the first African Americans and the wonderful stories they brought with them to the West Indies and America.