In the early days of the Australian railroad, when shiny new tracks opened the country up to new lands and new people, there was one courageous dog who was part of it all. 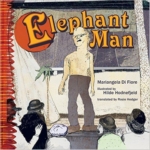 Every night people swarm to a theater in London to see the Elephant Man, whose real name is Joseph Merrick. They scream in terror at the sight of him. But beneath Joseph’s shocking exterior, he longs for affection and understanding. Disfigured in childhood by a rare disease, Joseph is rejected by his family, bullied in the streets, and ridiculed at his job. While touring Europe with a freak show, he’s robbed and abandoned. Joseph seems to encounter misfortune at every turn, but eventually finds friendship with a kind doctor in England.

A drought has settled in the area around the orphanage where Boniface lives. There are long line-ups at the tiny spring where all the local people get their water, and suddenly the orphans are pushed to the back of the line, unwelcome. Boniface’s houseparent, Henry, tells him that the people were mean out of fear–they feared there would not be enough water for their families. When the building of the orphanage’s well is completed, Boniface has an idea to help the villagers