Beverly, who is bossy and a bit of a snob, convinces her cautious friend Elizabeth to accompany her on an adventure to the island off the coast. Gerard, Beverly’s messy brother who is barely tolerated by the girls, insists on going with them and brings his cat. Things begin to look up when at the last minute the good-looking Kevin joins the trip, but when they become stranded on the island and encounter a strange inhabitant, this motley crew must find ways to support each other and put up with one another’s shortcomings.

A surfing competition, some serious skateboarding and several puzzling mysteries are the ingredients for an awesome beach vacation. While Rhys is totally focused on winning the Junior Surf Championship, Toby just wants to win his dare with Rhys. But things have a habit of not working out as planned, and the boys learn that it doesn’t pay to assume anything, about anyone, ever!

On a family vacation in Venice, Olivia indulges in gelato, rides in a gondola, and finds the perfect souvenir. 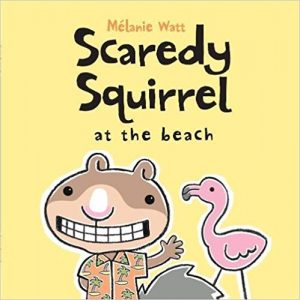 Scaredy Squirrel doesn’t like crowds so he doesn’t go to the beach, he builds his own. However, something is missing so he needs to go to the real beach and retrieve it.

“Some dolphin luck would be very useful,” said Beany. It’s a wet, cold, and miserable Christmas. Mrs. Robinson is ill and so is Old Blanket, the Robinsons’ beloved dog. Following the doctor’s orders, Mr. Robinson takes Mrs. Robinson off to recuperate in a warmer climate, leaving Beany and Sun Dance, their two younger children, in the capable care of Mrs. Brogan, who with her son, Robin, lives in the other half of Porridge Hall, an old seaside mansion. The twins, Ant and Perry, are shipped off to Great Aunt Mabel. To Beany and Sun Dance, it seems as though things can’t get any worse. Sun Dance settles down to capture any burglar who may attempt to rob their house, and Beany determines to find an ancient sword, with a hilt in the shape of a dolphin, that is supposed to bring luck and grant wishes. Meanwhile, Ant and Perry find their old aunt not quite what they expected. She eats porridge and nothing else and lives with two large dogs, four cats, and a parrot. Before the Robinson family is reunited, each one of them has had extraordinary, sometimes scary, frequently harrowing adventures that make for touching, often hilarious, utterly absorbing reading. This companion to Hilary McKay’s earlier Dog Friday and The Amber Cat, with its rich characterization and great originality, is an outstanding achievement.

While preparing for and going on vacation to Italy with her friends and family, food-loving English teenager Angelica deals with her unrequited love for Sydney, her fear of being seen in public in a bikini, and her worries that her mother might be having an affair.

A teenaged boy becomes embroiled in the mysterious life of a farm girl while on vacation in the south of France.

While visiting her grandparents, Roberta the dog is bored so she sets off alone for the beach, only to encounter a dog that scares her into hiding.

When eleven-year-old Kate and her younger brother Michael encounter a baby griffin in an Italian garden, they vow to help the creature find its way back home and to keep Griffo’s existence a secret.

Martin and his family are enjoying a sun-filled vacation on a beautiful Caribbean island–until they are stopped at gunpoint, blindfolded, and bundled into a truck that heads for the dense forest of the island’s interior. Pushed to their physical and emotional limits as they are forced deeper into the wild terrain, the hostages come to understand something of the harsh political backdrop of life on sunny Santa Clara, and the events that have shaped the lives of their captors and fueled their actions.