In 1883 thirteen-year-old Katrien Courtlandt is more interested in science and exploring the Javanese jungle for beetles with her native friend, than in becoming a young lady like her despised cousin Brigitta–but when Krakatoa erupts, the tsunami hits, and their families are swept away the two cousins must struggle to survive together.

While volcanoes spew golden lava around the world, djinn twins John and Philippa, with their parents, Uncle Nimrod, and Groanin, face evil more powerful than ever before when they try to stop the wicked djinn trying to rob the grave of Genghis Khan.

This story describes the formation, naming, and colonization of the twenty-seven-year-old volcanic island Surtsey and how the first animals and plants became established there. 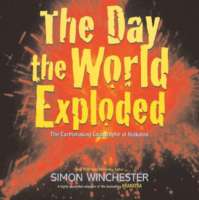 In this illustrated account based on Simon Winchester’s bestselling Krakatoa, the colossal explosion is brought to vivid life. From the ominous warnings leading up to the eruption to the wave of killings it provoked, here is an engaging and insightful look at what happened on the day the world exploded.