When Gerda the blue whale was very small, her mother would sing a beautiful song telling her that if she were ever lost she should look to the stars and they would guide her. Then it’s time for the little whale to leave home. Her adventures take her from the warm waters of the equator to the freezing poles. Along the way she meets clever killer whales, playful penguins, a friendly polar bear and the ancient narwhale. Then one day, the little whale realizes she wants to find somewhere to stay forever. How will she know she’s found the right sea for her? With her mother’s song in her heart, Gerda follows the stars to a place she knows she can call home.

Now that Professor Whale has retired, he writes many letters to “You, Whoever You Are, Who Lives on the Other Side of the Horizon”. Seal and Pelican are busy delivering the letters and Penguin is now teaching. Although he is happy his friends are doing so well, Whale wants a special friend;, who might call him by a friendly sort of name. Like Whaley, maybe, instead of Professor.

Abelardo defies his father’s instructions and sets out to free a whale caught in their tangled fishing net.

As her beloved grandfather, chief of the Maori tribe of Whangara, New Zealand, struggles to lead in difficult times and to find a male successor, young Kahu is developing a mysterious relationship with whales, particularly the ancient bull whale.

Every day, in a house by the sea, a little boy watches his father leave for a long day’s work. One night, a great storm washes a small whale onto the beach. The boy discovers the whale is a good listener. The father discovers the boy is lonely. Together, they return the whale to the sea. And from that day on, the boy learns that the father can be a good listener too. 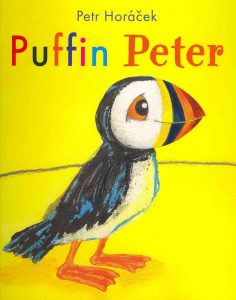 When his best friend is lost in a terrible storm, an intrepid young puffin teams up with a big blue whale to mount a rescue mission and discovers that while many other birds match his friend’s description, none are quite the same.

An old man tells the lighthouse boy about a successful sea captain who had made his fortune hunting whales, until their song entered his heart.

When a huge white whale gets stuck between the banks of the Mississippi River causing the water to stop flowing, Jean Laffite finds a way to get the river moving again. 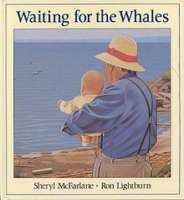 This book tells the simple story of an old man who lives alone in a house overlooking the sea. His life has assumed a cozy regularity to match the seasons: collecting firewood and clams in wintertime; planting his garden in the spring; and, in summer, watching his beloved orca whales swimming by. When his daughter comes to visit one spring with a new infant, the man has someone with whom to share his love of the natural world–especially the whales.

During the early 1600s, there was an active whaling industry in Canada. Whale oil was used to light the streets and buildings of European cities and to manufacture leather, wool, and soap. The baleen was used to make everything from carriage springs to corsets. Told from the point of view of a young Inuit boy named Tuk, this story imagines what might have happened if the people of Tuk’s Baffin Island winter camp had encountered European whalers, blown far from their usual whaling route. Both the hunters and the whalers prize the bowhead whale for different reasons. Together, they set out on a hunt, though they are all on new and uncertain ground. Scrupulously researched and vetted, this early chapter book inspires discussion about communication between two groups of people with entirely different world views, early whaling practices, and a productive partnership that also foreshadows serious problems to come. Simply and beautifully told, Tuk and the Whale includes a glossary, historical note, and recommendations for further reading.