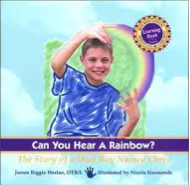 Can You Hear a Rainbow?: The Story of a Deaf Boy Named Chris. Heelan, Jamee Reggio. Simmonds, Nicola, Ill. Rehabilitation Institute of Chicago Learning Book, 2002. ISBN: 9781561452682.
When Chris was a baby, his parents realized that he didn’t notice the dog barking or a door slamming. Chris tells young readers about what it is like to be Deaf and describes typical events in his life and the strategies he uses to function effectively in his daily life.

Dad and Me in the Morning. Lakin, Patricia. Steele, Robert G., Ill. Albert Whitman, 1994. ISBN: 9780807514191.
Early one morning a young boy wakes to his special alarm clock. He puts on his hearing aids and goes to wake his father. Together they brave the cold as they walk down a dirt road to the beach, a daily ritual they share. 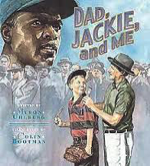 Dad, Jackie, and Me. Uhlberg, Myron. Bootman, Colin, Ill. Peachtree Publishers, 2007. ISBN: 9781561453290.
Jackie Robinson is the new first baseman for the Brooklyn Dodgers–and the first Black player in major league baseball. A young boy shares the excitement of Robinson’s rookie season with his deaf father. Each day he listens eagerly to the Brooklyn Dodgers games on the radio and uses sign language to tell his father about the Dodgers when he returns home from work.

Deaf Child Crossing. Matlin, Marlee. Simon & Schuster, 2004. ISBN: 9780689866968.
Megan is excited when Cindy moves into her neighborhood — maybe she’ll finally have a best friend. Sure enough, the two girls quickly become inseparable and Cindy starts to learn sign language so they can communicate more easily. But when they go away to summer camp together, problems arise. 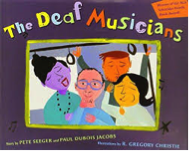 The Deaf Musicians. Seeger, Pete; Jacobs, Dubois. Christie, R. Gregory, Ill. Putnam, 2006. ISBN: 9780399243165.  Lee goes to a school for the deaf to learn sign language. There, he meets Max, who used to play the sax. Riding the subway to class, they start signing about all the songs they love. A bass player named Rose joins in and soon they’ve created a sign language band, performing for audiences in the subway.

El Deafo. Bell, Cece. Turtleback edition, 2014. ISBN: 9780606361484.
Cece Bell chronicles her hearing loss at a young age and her subsequent experiences with the Phonic Ear, a very powerful–and very awkward–hearing aid. The Phonic Ear gives Cece the ability to hear–sometimes things she shouldn’t–but also isolates her from her classmates. She really just wants to fit in and find a true friend, someone who appreciates her as she is. This memoir is told in a graphic novel format. 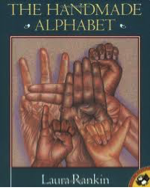 The Handmade Alphabet. Rankin, Laura. Puffin Books, 1996. ISBN: 9780140558760.
This alphabet book celebrates the expressiveness of sign with lyrical clarity and creativity. Each illustration is imaginatively linked to a word that begins with a corresponding letter of the written alphabet. 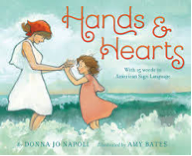 Hands & Hearts: With 15 Words in American Sign Language. Napoli, Donna Jo. Bates, Amy, Ill. Abrams, 2014. ISBN: 9781419710223.
A mother and daughter spend a sunny day at the beach together where they swim, dance, build sandcastles, and, most importantly, communicate. But their communication is not spoken, but signed.

Learn to Sign the Fun Way: Let Your Fingers Do the Talking with Games, Puzzles, and Activities in American Sign Language. Warner, Penny. Three Rivers Press, 2001. ISBN: 9780761532637.
This book goes beyond the manual alphabet and teaches the beautiful language of sign in a simple, interactive format. 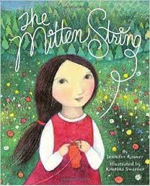 The Mitten String. Rosner, Jennifer. Swarner, Kristina, Ill. Random House, 2014. ISBN: 9780385371186.
With language and imagery reminiscent of stories told long ago, this modern Jewish folktale tells the story of Ruthie, who knits mittens to sell at market. When her family helps a deaf woman and her baby, Ruthie knits mittens for them connected by a piece of yarn so the mother can feel the baby moving. Includes knitting and sign language glossaries. 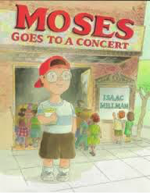 Moses Goes to a Concert. Millman, Issac. Farrar, Straus and Giroux, 1998. ISBN: 9780374350673.
Moses and his school friends are Deaf. They communicate in American Sign Language. Even though they can’t hear, they enjoy many activities through their other senses. Moses and his classmates are going to a concert where their teacher, Mr. Samuels, has two surprises in store for them.

My Birthday Party. McDonald, Erin. Hanrahan, Erin, Ill. Talking Hands, Inc. 2002. ISBN: 9780972142717.
The classic tale of a girl’s birthday party where she ultimately learns the true value of a birthday gift. A duel language book featuring both ASL and English.

Silent Star: The Story of Deaf Major Leaguer William Hoy. Wise, Bill. Gustavason Adam, Ill. Lee & Low Books, 2012. ISBN: 9781600604119.
This book is a tribute to one of the most inspirational figures in baseball history. A talented player with a standout record, Hoy is a shining example that success in life should not be measured by differences but by drive and determination. 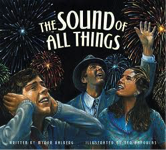 The Sound of All Things. Uhlberg, Myron. Papoulas, Ted, Ill. Peachtree 2016. ISBN: 9781561458332.
A young hearing boy and his deaf parents take an outing to Coney Island, enjoying the rides, the food, and the sights. The father longs to know about how everything sounds, and his son does his best to interpret the noisy surroundings. When the family drops in at the library on the way home, the boy realizes that he can find a wealth of new words in books to help him explain the hearing world to his father.

This is My Garden. McDonald, Erin. Hanrahan, Denise, Ill. Talking Hands, Inc. 2002. ISBN: 978097214272.
Children love to explore the wonders of growing a garden, and this book delves into the patient process of ‘magically’ turning seeds into vegetables and harvesting a self-planted garden. This duel language book featuring both ASL and English.

Time to Sign: Sign Language for Kids. Clay, Kathryn. Capstone Press, 2013. ISBN: 9781620656877.
Time to Sign will have you signing in no time! A helpful introduction and alphabet provide a base for hundreds of words and phrases. What’s the sign for fun? You’ll soon know. And you’ll learn signs you can use wherever you are.

What am I Scared Of? McDonald, Erin. Hanrahan, Denise, Ill. Talking Hands, Inc. 2002. ISBN: 9780972142700.
What Am I Scared Of? offers a fantastic journey through the world of childhood fears. This duel language book featuring both ASL and English provides a safe place for children to explore their fears.

Wonderstruck. Selznick, Brian. Scholastic 2011. ISBN: 9780545027892.
Ben and Rose secretly wish their lives were different. Ben longs for the father he has never known. Rose dreams of a mysterious actress whose life she chronicles in a scrapbook. When Ben discovers a puzzling clue in his mother’s room and Rose reads an enticing headline in the newspaper, both children set out alone on desperate quests to find what they are missing. Set fifty years apart, these two independent stories–Ben’s told in words, Rose’s in pictures–weave back and forth with mesmerizing symmetry. How they unfold and ultimately intertwine will surprise you, challenge you, and leave you breathless with wonder.