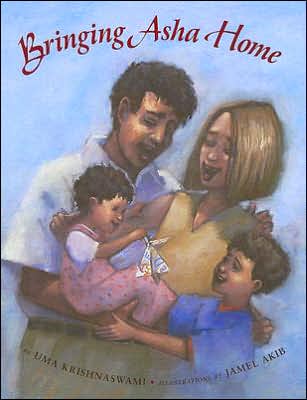 It is Rakhi, a special Hindu north Indian holiday celebrating the bonds between brothers and sisters where they promise to be good to each other. Arun wishes his soon-to-be-adopted sister could tie a shiny bracelet on his wrists. But it takes nearly a year to receive governmental approval to bring Asha home and the wait is unbearable for Arun. Throughout the year Arun finds special ways to bond with his new sister.

This story touches on some of the feelings that adoption can bring to families through its tenderness and sincerity. These feelings range from joy to frustration. Many families who adopt international children deal with the ever changing laws, policies and requirements which make the extended waits excruciating. The realistic feeling many families experience with international adoption are approached in this book. Author Uma Krishnaswami pairs up with illustrator Jamel Akib to create an honest and moving book about an adoption story. Not only will the reader sense the longing of the wait through Arun’s perspective but we can sense the hopes of a boy and his family as they await their newly adopted daughter.

Rakhi is woven throughout the story to bring in a culturally authentic issue of this Indian adoption. We are introduced to the importance of this festival of tying of a rakhi, or holy thread, by a sister on the wrist of her brother and how they traditionally feed each other sweets. This traditional holiday is told throughout Indian history. The author does not delve into some of the major issues to consider with international adoption such as the importance of names, race/culture, language, the child’s birth history. Because this is a universal story about the hopes of a boy and his family, hopefully it will be read outside of the adoption community. Other perspectives on adoption can be found in Jin Woo (Bunting, 2001), My Mei Mei (Young, 2006), and Ryan and Jimmie and the Well in Africa that Brought Them Together (Shoveller, 2006).