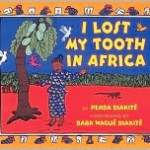 “Hi! My Name is Amina.” With that beginning Amina takes readers on a journey from her home in Portland, Oregon, to visit her father’s family in Bamako, Mali, in West Africa. Just before they arrive, eight-year-old Amina discovers she has a loose tooth. When her father tells her that the African Tooth Fairy gives a chicken to children who put a tooth under a gourd, Amina is anxious for her tooth to come out. Throughout her visits with cousins, aunts, uncles, and her grandmother, she works on her tooth until it finally pops out as she is brushing her teeth. She places the tooth under a calabash gourd and later finds it replaced with a rooster and a hen. Amina cares for them and is excited to find eggs in their coop one morning. Amina worries that the eggs won’t hatch before she leaves but on her last day in Africa, as she is saying good-by, she discovers the eggs are hatching. Uncle Madou promises to care for the chicks until Amina returns.

This enjoyable contemporary realistic story is based on a true account written by the author when she was twelve years old about her younger sister Amina. Penda’s father, Baba Wagué Diakite, is the illustrator of this book. An award-winning creator of children’s books, he was born and raised in Bamako in Mali, West Africa. He moved to Portland over twenty years ago and married an American artist. While Penda grew up in Portland, she traveled to Mali every year with her family. Inspired by her father’s storytelling and these family trips, Penda eagerly wrote her story.

Since losing teeth is a common experience, the story has universal appeal for children. It offers rich possibilities for discussions about growing up, responsibilities, and family and cultural traditions. As she tells the story, Amina invites readers to experience African life and culture, including living with extended family, experiencing foods and communal meals, and spending time in various activities. Readers also learn something about the African language through Bambara (the national language of Mali) phrases used in the text. An appendix that contains a glossary of Bambara words, a good-night song, and recipe for African onion sauce mentioned in the text add to the authenticity of the book.

The illustrations by Baba Wagué Diakite are colorful ceramic tiles framed in distinctive borders that pick up elements of African life related to the story, such as teeth, roosters, hens, sun, moon, eggs, and vegetables. The front and back endpapers display patterns representative of African culture. The lively, lush illustrations convey a close happy family, bring the story to life, and invite readers into Amina’s family and adventures.

The book would compliment other texts on tooth traditions around the world, such as Tooth Tales from around the World (Marlene Targ Brill, 1998) and Throw Your Tooth on the Roof: Tooth Traditions from Around the World (Selby Beeler, 1998).