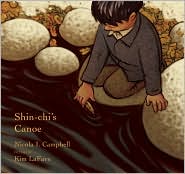 Shin-chi’s Canoe takes the reader into a young boy’s first experience going to an American Indian residential school—a government-sponsored and church-run school established in the late 1800’s to colonize and civilize Native children. A finalist in the prestigious Governor General’s Literary Awards of the Canada Council for the Arts, this book portrays sensitively and powerfully this injustice against Native American people at the end of the 19th century and far into the 20th century in Canada and the United States. Campbell’s first book, Shi-shi-etko (2005), has been praised by scholars as being astounding, honest, and poignant in telling the story of Shi-shi-etko before she leaves her family to go to the school. The story of Shin-chi, little brother, is set at the school.

Shin-chi’s Canoe opens in the days before he must go with his sister to the residential school. Knowing that their hair will be cut at the school, the sister asks her grandmother to cut their hair and ceremoniously take it to the mountain. Before they leave on the cattle truck that is sent to gather the children of the village, Shin-chi receives a small wooden canoe from his parents to take with him, and tearfully they part. His sister reminds him to remember the images they pass in traveling away from their home as they will not see their family until the sockeye salmon returns. The canoe is a reminder of a surprise that will be waiting when he returns the following summer, and it becomes a symbol of hope to survive the school year – a year that includes hunger and separation from his sister. The canoe helps to maintain the book’s hopeful tone that leads to the joyous reunion of the family.

The author provides a one-page focused and compelling history of the residential schools citing the number of children in Canada and the U.S. who attended as well as more contemporary efforts to compensate for the government’s effort to take away culture, language, and family with money and apologies. Having many family members who attended these schools, Campbell gathered information from interviews with her family and tribal elders (Interior Salish and Métis tribes) who survived this experience. Her book points to the “steadfast resistance, determination, courage, healing, strength of spirit and an overwhelming love for our children and family.” The illustrator, Kim Lafave, used tribal interviews and archival photographs in the illustrations. The use of drab, muted brown tones and the lack of facial expressions provide a context in which the characters are somewhat dehumanized. In contrast to the colorful images of home, the school images are those of isolation and loneliness.

Shin-Chi’s Canoe, alone or paired with Shi-shi-etko, provides an excellent and understandable resource for children to learn about the resilience of Native children in this particular era of social injustice. For older students, both may be paired with Sweetgrass Basket (Marlene Carvell, 2006). They might also be used in a text set on “Schooling and Social Injustice” in which readers look across the past century at education in books such as Remember: The Journey to School Integration (Toni Morrison, 2003) or Miss Crandall’s School for Young Ladies & Little Misses of Color (Elizabeth Alexander and Marilyn Nelson, 2007).