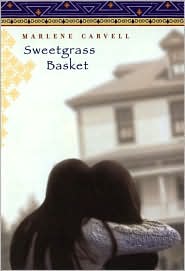 The Carlisle Boarding School was one of many institutions at the turn of the century established to save American Indian children, remove their “Indianess,” and prepare them for menial jobs as they became adults in the early 1900’s. Through poetic text and alternating voices, Marlene Carvell weaves a moving story of two Mohawk sisters sent to live at the Carlisle Boarding School when their father is convinced by visitors that this is the best place for his daughters following their mother’s death. This novel is based on the experiences of members of the author’s Mohawk family, four of whom attended Carlisle. History documents the forced assimilation of many Native American children in the United States and Canada sent to boarding schools when their parents were either convinced it was for the children’s own good or forced to send them due to local laws. After arriving at Carlisle, Mattie and Sarah are forced to work and required to use only the English language. Although they are not allowed to have remembrances from home, Sarah surprises Mattie with her beloved sweetgrass basket, a gift from her deceased mother, only to have it destroyed after being taken from them. They keep memories of their home and culture alive amidst the cruelty of the school’s director and some of the students, leaning on each other for strength. Mattie, the older sister, is falsely accused of stealing a brooch from the head of the school, and tries to escape and return home. When she is found, she is ill and, after returning to the school, her solitary punishment results in her death.

While oppression is a theme that weaves throughout the story, the girls’ resistance offers hope and points to their strength. The girls find friendship with an African American worker who tells them what the school leaders expect and steps in to help the girls when possible, despite his own forced submission to the dominance of those in charge. This friendship strengthens the resilience the girls develop as they work as a seamstress and in the laundry, marching to work and school with frequent reprimands for not following all the rules. Homesickness and defiance enter often into their dialogue, and while they are powerless, Sarah does have the final victory when she finds the missing brooch. Rather than clear her sister’s name, she decides not to give the head of the school the pleasure of having her brooch or of thinking it was returned out of guilt. While the story sensitively represents the sadness of tearing families apart and the attempts to strip away the cultural lives of these children, it also preserves the integrity of the culture through the personal insights, strength of spirit, and cultural values of each narrator.

Carvell is known also for her moving novel, Who Will Tell My Brother (2004), a contemporary story of a young man who takes a stand against the stereotypical attitudes towards Native Americans at his school. This story captures Carvell’s own sons’ experiences and, as in Sweetgrass Basket, she portrays the Native American struggle through strength and integrity, despite the social injustice. The two books can be used together to compare attitudes toward Native Americans at the turn of the century and in contemporary times. The images in Sweetgrass Basket document the history of the Indian boarding schools through this family generational sharing.

This story can also be paired with the picture book, Shin-chi’s Canoe by Nicola I. Campbell (2008), to explore the boarding school experience. The friendship shared between two oppressed groups, Native American and African American, can be compared with friendships in such books as Crossing Boc Chito: A Choctaw Story of Friendship and Freedom by Tim Tingle (2006), or the friendship between a Japanese-American girl in an internment camp during War II and a Mohawk boy in Weedflower by Cynthia Kadhota (2006).