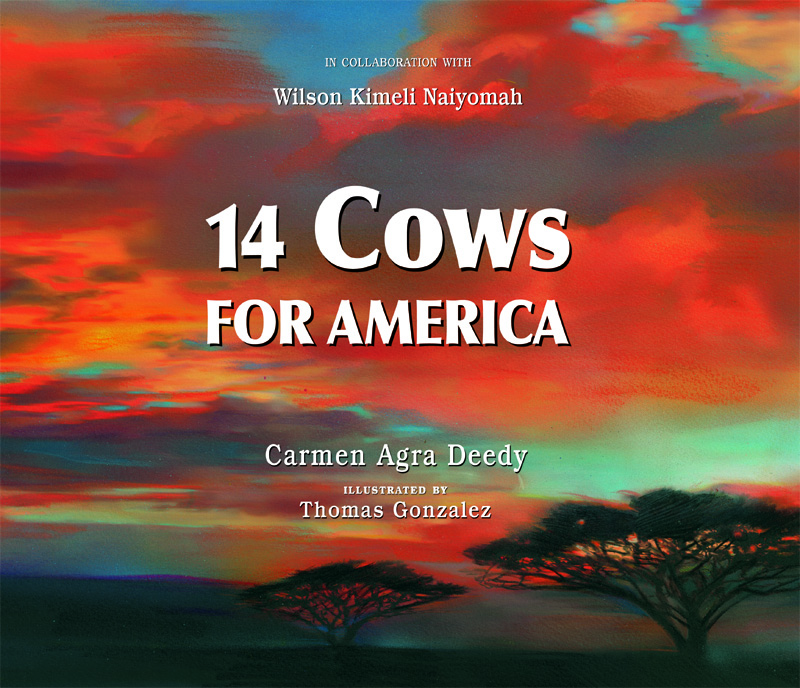 …there is no nation so powerful it cannot be wounded, nor a people so small they cannot offer mighty comfort.

“To the Maasai, the cow is life.” The nomadic life of these once feared warriors depends on their cows as the herds sustain their survival. In this collaboratively told true story, the cow also represents hope for post 9-11 America as the Maasai people share their grief and give 14 cows as their symbol of comfort, peace, and life.

The richly earth-toned illustrations set the tone of community warmth, reflected in the joy of the faces in this small village in Kenya as one of their own returns from the United States. Kimeli is asked for stories about where he has been and though he has much to share, foremost in his mind is the story of what he witnessed on September 11, 2001 while in New York studying to be a doctor. The red and amber hues of the illustrations create a connection between the starkly opposite contexts of this peaceful tribe and the fiery horror of the story Kimeli tells. He asks blessings on his one cow that he is giving to America, and when the American ambassador arrives, unknowingly to receive these gifts, the number of cows has risen to 14.

Throughout the story, readers gain insights into the lifestyle of this Kenyan tribe. Specific words and gestures that go back to their warrior days are still part of daily life, although the gentle care they respectfully give their cows is constantly a point of emphasis. Both illustration and text portray the celebration of giving the cows to the United States ambassador through bold, colorful costumes, dances, songs, and sacred blessings. Thomas Gonzalez, the Cuban-born illustrator, shares that he included a twin tower image in almost every picture – two figures, spears, giraffes, shafts of light—to remind readers that all people are connected and “no matter how powerful you are, unexpected circumstances can come out of nowhere and totally change everything … and that help often comes from people you don’t know” (Hahn, 2009).

When Carmen Agra Deedy, who like Gonzalez is from Cuba, completed the text, she and Peachtree Publishers sought out Kimeli Naiyomah for his approval and to ask him to serve as a cultural consultant. Kimeli states that he was pleased to be asked to help make this story authentic in honor of his people and the lives lost on 9/11 (Lodge, 2009). His collaboration in the writing of this book includes an end note that speaks to the authenticity of this event. His own insights are significant to helping young readers understand the significance of this act of generosity as is the information that tells about the herds’ continued growth. They will never be slaughtered as a symbol of the shared pain and hope between America and the Maasai people.

Books to align with the theme of giving hope through helping include, One Hen: How One Small Loan Made a Difference (Kate Smith Milway, 2008), Planting the Trees of Kenya: The Story of Wangari Maathai (Claire Nivola, 2008), and One Thousand Tracings: Healing the Wounds of World War II (Lita Judge, 2007). Titles that pair well with the text to learn more about the Maasai are First Come the Zebra (Lynne Barasch, 2009) and Facing the Lion: Growing Up Maasai on the African Savanna (Joseph L. Lekuton & Herman Viola, 2003).