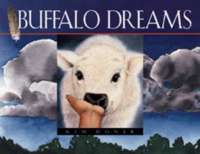 While watching T.V. and adding to the dream catcher she’s had since childhood, Sarah Bearpaw hears the news of the birth of a white buffalo, the only one in the world. Because of tribal stories that have been passed down, Sarah knows that the baby buffalo is a sign of good things to come. Sarah and her family quickly prepare to make the trip to visit the new baby buffalo. Sarah has decided to give the feather from her grandfather’s headdress as a gift to the buffalo. Sarah’s father is impressed with her unselfishness because the feather is a symbol of strength. He tells Sarah that to give away strength has rewards.

Upon reaching the campground where the white buffalo roams, Sarah’s family pitch their tents for the night. The next day, they plan to take their gifts and hang them from the tree for the white buffalo. Joe, Sarah’s younger brother, wishes that he could touch the buffalo so that he could become magic. Sarah secretly wishes the same. During the middle of the night, Sarah wakes up and notices that Joe is gone. She knows exactly where to look for him. Sarah finds Joe climbing over the fence into the buffalo pen. Angry and in fear for her baby calf, the mother buffalo bellows as she moves toward Joe. Sarah jumps in front of Joe, protective of her little brother, and asks the mother buffalo to please let them go safely. Suddenly, the baby white buffalo walks past his mother and places his nose in Sarah’s hands. Sarah has touched magic.

The white buffalo is a sacred symbol for many American Indian Nations. The chances of a white buffalo being born are one in ten million. The author wrote this book based on the story of a real white buffalo, Miracle, born in 1994, whom people drove many miles to see (http://whitebuffalomiracle.homestead.com/). Although the white buffalo is an important symbol for Native Americans, the dream catcher also has significance within the culture and around the world. An authentic tradition to the Ojibway tribe (http://www.nativetech.org/dreamcat/dreamcat.html), the legend of the dream catcher is that bad dreams will not be able to pass through it, keeping children safe from nightmares. Sarah’s dream catcher had hung above her bed since she was born. She even hung it from a tree as she slept in her sleeping bag on her trip to see the white buffalo.

The story is significant because the author wrote it as contemporary literature. The characters in this story wear modern clothing, live in a modern house, watch T.V., and drive a vehicle as well as camp out in a sleeping bag, not a tipi. It is important for all readers to see Native cultures represented in modern stories since often they are trapped in history and, in particular, in Thanksgiving stories. While the family names in the story are ones that might be considered stereotypes, these names are found in contemporary settings. Sarah’s family’s last name is Bearpaw and a friend is Greg Little Wolf.

The author wrote this story based on the legend of “White Buffalo Calf Woman.” Although the legend has been transformed as it has been passed through generations and among different tribes, the common belief is that a helpful spirit becomes a white buffalo and continues to help others prosper. The author and illustrator, Kim Doner, uses realistic paintings to bring the story to life with many of the plains tribes represented in the gifts left for the calf. These gifts are found in art from the Sioux, Kiowa, Potawatomi, Cheyenne, Arapaho, Cherokee, Osage, and Ojibway tribes. Doner explains that she chose not to make the Bearpaw family a part of a specific tribe because the real white buffalo, Miracle, was visited by all tribes and so many other people from around the world. She states that she wanted to keep it open for people in hopes that they would focus on the meaning of the story, not the specifics (Kim Doner, personal communication, September 19, 2011). Donor is originally from Oklahoma where she still lives and works as an artist. She has Cherokee roots and her interest in Native American life is evident in her work.