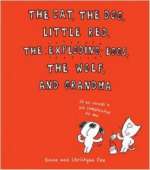 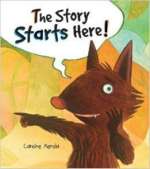 Humor can be sly and subversive, based on the reader’s awareness that certain traditional elements of a book or a well-known story are being twisted by the storyteller. The humor in these two picture books draws from their metafictive elements as well as the contrast between the perspectives of children and adults. As postmodern picture books, they play with format and expose the artistic creation of the book by having the narrator speak directly to the reader. The playfulness of the dialogue between characters assumes that the readers possess a certain knowledge base of stories and so may require a more sophisticated reader to fully appreciate the humor.

The Cat, the Dog, Little Red, the Exploring Eggs, the Wolf and Grandma is a playful story about a story of Little Red Riding Hood. A cat and pup argue their way through a reading of the traditional story with the cat exhibiting an exasperated adult response to the constant interruptions of the irrepressible, literal-minded pup. The pup is sure “The Red Hood” must have superpowers given her red cape and grows very concerned about her intelligence, pointing out “I mean, if there were a wolf dressed up as MY grandma, I might have noticed right away.” His own retelling of the story and questioning about whether the cat is “absolutely sure this is a children’s book” will provoke chuckles from readers. The cat and dog also have a running joke about the endpapers of the book. The illustrations are simple line drawings with only a touch of color. The words of the cat and dog are emphasized through plenty of white space and excellent use of capital letters and bold type.

The dry British humor of the text will appeal to older readers who know the traditional tale and so can appreciate the many allusions in the conversation between the cat and dog. Adults will hear themselves in the words of the frustrated cat and connect to their own interactions with literal-minded children. Both will walk away with a new view of a familiar tale and a good laugh. Younger children who are immersed in a study of many versions of Little Red Riding Hood might enjoy this book as a good ending experience, a way to play with their understandings of the traditional tale.

Christyan Fox is a freelance illustrator and writer and Diane Fox is a graphic designer, both from Thames Ditten, UK. They teach courses on picture books and are involved in packaging design, graphics, magazines and advertising in addition to creating picture books. They work together on story ideas and then Christyan does the final text and illustrations. Diane works out the page layouts and makes dummies to send to publishers as well as handles other aspects of the book business. Christyan studied animation and says that achieving movement of line is very important to him, citing Quentin Blake and Tony Ross as major influences, along with Cezanne because of his distortion of the rules of perspective to suit the needs of the image.

The Story Starts Here! is based around the humor of a young child who has decided to be contrary. The young wolf decides to start the book from the back, providing readers with directions on where to go for no other reason than “because I said so.” He also decides to play piano with his toes and wear his pants on his head, leading his exasperated parents to banish him to his bedroom. When he runs away, he finds the forest creatures fleeing from a fearsome creature, who turns out to be his own father walking on his hands because he felt like playing a joke. The reader is required to flip the book in order to continue reading the last several pages. This light hearted book about toddler rebellion encourages an interactive response from the reader and a nontraditional approach to book handling. The illustrations in colored pencils and ink along with the speech bubbles function to effectively pull readers into the world of a young child.

The book was originally published in French by Caroline Merola, a Quebec illustrator who has been published by various Canadian and American publishers. She says that she has been drawing for as long as she can remember, with a particular focus on animals, forests, friendly monsters, and mischievous children.

These two books would work well with other metafictive books that highlight the artistic process of creating a story, including Chloe and the Lion by Mac Barnett and Adam Rex (2012), Warning: Do Not Open this Book! by Adam Lehrhaupt and Matthew Forsythe (2013), There are Cats in this Book by Vivian Schwarz (2008), Chester by Melanie Watt (2008), and We Are in a Book by Mo Willems (2010).

Another fun text set are postmodern picture books that play on the character of wolves, such as Beware of the Storybook Wolves by Lauren Child (2000), Wolves by Emily Gravett (2005), The True Story of the Three Little Pigs by Jon Scieszka and Lane Smith (1989), Wait! No Paint! By Bruce Whatley (2001), The Three Pigs by David Wiesner (2001), and What Really Happened to Little Red Riding Hood: The Wolf’s Story by Toby Forward and I. Cohen (2005).

WOW Review, Volume VII, Issue 2 by World of Words is licensed under a Creative Commons Attribution-NonCommercial-ShareAlike 4.0 International License. Based on work at https://wowlit.org/on-line-publications/review/vii-2/